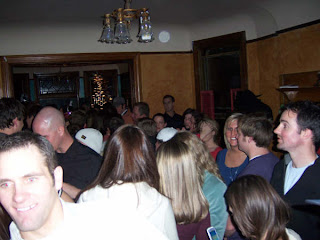 Having been over a year since John Maxim's divorce, he thought it prudent to throw a New Years eve party. This used to be (in his pre-marriage days) one of his more prominent talents. As I understand it, his singles ward wanted to use his house for a "Ward New Years Party" and he figured that would be great. It would enlist helpers in the setting up and in the financing of the little shin-dig. I got the text invite, and forwarded it to all of my friends as instructed. They invited their friends... and a lot of people showed up... I mean a lot!

When I arrived I could not believe my eyes. There must have been 20 people in the front yard just trying to get inside. Discussion with some fellow party patrons, prompted me to try and figure out how many people were in the house at one time. I have made some simple calculations based on the square footage of John's home. First, the fact that you couldn't move because it was shoulder to shoulder standing room only. Then if you figure the average adult is 8" thick and 22" wide, throw in 6" of personal space. Calculate that, and then subtract 200 people to compensate for moving space, furniture, and the don't-stand-in-the-way-of-the-two-people-playing-guitar- 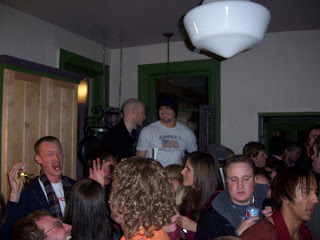 hero gap. That puts... not unrealistically, 514 people in the Maxim home at one time. I know what your thinking, "That sounds preposterous?" But, if you were there you know that this is not an unrealistic figure.

This is further evidenced by fact that at approximately 11:30 pm. Everyone at the party heard the loud "CRACK" that was then followed by another loud "CRACK". I was in the kitchen at the time, and saw John shoving his way through the crowd frantically heading towards the dance floor. A few seconds later the music stopped. Which of course was followed loudly by wailing disapproval. The dancing was, as the cool kids say, "off the hook," and as a result the floor in the living room broke! Literally! From above you could see and feel the three to four inch dip in the floor. I was told that John went down to the basement after the audible cracking and that's when he discovered the damage.

John knew of course that turning the music off was the only way to insure that people didn't start falling through the floor. Five of the floor joists cracked as you can see in the picture below. Luckily, even with the damage the floor was sturdy enough that without the 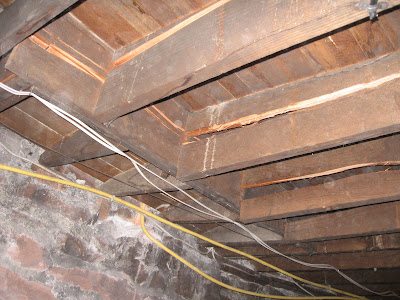 rhythmic bouncing that dancing promotes it held out until the party ended. Most people stuck around despite the glaring lack of music, gum was still handed out and new years kissing was abound at the stroke of midnight. In spite of the near calamity, fun seemingly was had by all.

I asked John about his floor and he stated simply, "This will just give me a really good excuse to throw another party in a couple of months, it'll be called the 'The floor is fixed dance party' wait for the text."

Trust me friends, I'll be waiting.

Hey Johnny Metropolis, I was at that party too, but I guess we didn't meet. But there were too many people to really meet anyone new. Wait...I take that back. I met a guy named Andy who kindly allowed me and a couple friends into the seemingly roomy bathroom as the masses counted down til midnight.

Let me know if John's floor totally caves in.

you probably should file some kind of reverse class-action lawsuit against all of us who attended.

I missed Guitar Hero??? Are you freakin' kidding me????

I think you should have Mr. Metropolis write these at least weekly. I mean, how hard can it be? I have some old "on the john" letters you should throw up here.

Man an invite would have been cool. I ended up playing rock band bymyself.

oh, i forgot to mention that i love the "mr. x" icon you got goin' on here.

I can't wait for 'The floor is fixed dance party'. I didn't get a chance to dance at the party - I was lucky I got to walk very far. Good luck with the repairs.