It has been a long time since that day I turned 16 and my Mom gave me the keys to our silver Honda hatchback so I could drive (by myself) to the Circle K in our neighborhood. I still remember the feeling of power and freedom I felt on that first* of many independent trips behind the wheel. It became apparent early on, that that power and freedom was something I was easily tempted to abuse. When I went on my mission three years later I had acqu 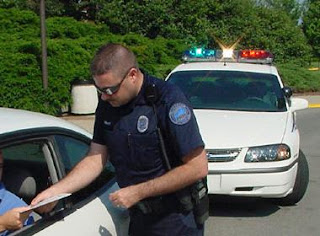 ired 13 speeding tickets and had my drivers license suspended. During said mission I was pulled over a few times but the paperwork required to give an American a ticket in England always kept me out of trouble. After my mission I got ticket after ticket, until at the point I got married I had accumulated an additional 12 speeding tickets, the last of which was accompanied by a "driving on a suspended license" (a $500 fine) seeing as it had been taken away again. During my marriage I got 4 more tickets all with the suspended license attachment. At some point, obviously not soon enough, I realized life might be easier and cost a little less if I would just slow down. Making a concerted effort to finally grow up and obey local traffic laws, I have been ticket free for the last two years. I have also again been a legally licensed driver for over a year now. Until yesterday. I received a speeding ticket in Eden, UT for going 8 miles over the speed limit! 8 miles an hour, in a 50! Truthfully, I didn't know what the speed limit was on this road, but it was a State Road, I thought I'd be fine at 60 or 65. For a chronic speeder it's almost humiliating to go down because of 8 measly miles per hour, "John the Speed demon" would have happily drove down that road at 90 miles an hour. And for a guy who was trying desperately to keep from getting pulled over so that his insurance rates would drop, it was a sad and frustrating moment. Which may explain why I acted like such an idiot and only made things worse - I will post that story later. In any case, feel free to congratulate or berate me for my er, uh... accomplishment.

* This was not the first time John drove the Honda by himself. One time, (in the midst of serious peer pressure) at the age of fourteen he stole his parents car and drove it around the neighborhood. He got caught and was punished severely.

I've had two speeding tickets. I got one on HIdden Valley Road for driving 34 mph. I maintain that if it wasn't a woman cop I would have gotten away ticketless. Not because I can flirt my way out of a ticket, but because I think women cops are mean.

You do drive really fast.

One time Me and some friend were trying to make it to beaver in 2 hours. I was behind the wheel and my friend Adam kept critisizing my driving so I pulled over on the freeway and made him take the wheel. We got pulled over for going 109mph in a 65mph zone. Needless to say he got slammed with a 400.00 ticket! I just laughed and told him I was glad I wasn't driving

The funny part about the photo you attached is that I'm pretty sure I beat that officer up when I was in Jr. High with him. He must have "Little Man's Syndrome".

When I read your subject line I thought maybe the words "speeding ticket" was a metaphor for "man date". Maybe you ARE straight.

i wrote about my speeding experiences somewhere on the internet... anyway, one one week i got pulled over three times. twice by the same cop. he didn't remember me even though it was the very next day (moron). i think the week after that when i got pulled over the cops told me i had a suspended license that i wasn't aware of and i would be under arrest. they said they could take care of it without arresting me, but it needed to be taken care of that night. so they drove me to an atm and i gave them 200 bucks.

Wow I thought that I was bad with 8 in a 3 year period. Luckily I haven't had any speeding tickets since Aug 2003 (knock on wood).

I'm curious to know what's the most over that you've gotten a ticket for?

Actually that is a good story... I was 18 and heading down to Cedar City for the weekend to hang wit some hotties. In Nephi we were in my friend Ryan's Moms 94' Subaru Legacy. The speedometer only went to 120, and we had it max out. On the other side of the freeway we saw a cop who had pulled someone over. With jovial confidence I didn't slow down at all assuming he was busy. Minutes later to my horror I saw in the rearview mirror a police cruiser bearing down on me at lightning speed. He pulled me over and informed me that I was going 140 miles per hour which was double the speed limit at the time. He was so mad he did not write me a ticket. He arrested me and took me to jail. I was faced with the decision; call my parents and have them bail me out or call the chicks we were going to see... we called the chicks and went down to Cedar City. I had to take care of it quietly behind my parents back (which I did successfully) I even had to take out a small loan to pay the fine ($1000) so that I could go on my mission.

I can't imagine what you must pay for insurance, or even what all these tickets have added up to. But congratualtions nonetheless, that's quite the accomplishment.