I went to a concert last night to see the band "Cobra Starship." I discovered this band thanks to the theme song and video they did for the movie "Snakes on a Plane". A film which contrary to popular opinion I really liked. Cobra is kind of a punk-pop band with a fairly original sound despit the popularity of punk-pop these days. I especially like them because of their sarcastic and obnoxious lyrics. Also I have a thing for hot punk rock chicks, i.e. No Doubt, Save Ferris, Shiny Toy Guns.

Anyway, this concert was held at "The Venue" downtown. As my friends and I walked from our parking spot we walked past mini-van after mini-van with "older-than-me" adults sitting or sleeping in their cars. My mind flashed back to the episode of "The Simpsons" when Homer took Bart and Millhouse to the Spinal Tap concert. I thought, "how old are the kids at this concert." When we entered the building I was surprised to see a lot of young kids. I'm not sure what about this surprised me so much, I remember going to see Metallica in 1993 (when I was 14) as a kid. I don't remember feeling young then. Now though, for the first time in my life I felt uncomfortably old. There were plenty of other people there my age, well, at least close to my age... except for the one guy with the bald spot and the mullet, I might have been the oldest person there, but not by more than a year or two. The concert was outstanding, and despite my age-ist feelings I had a pretty great time.
So now I have to wonder, will the "I'm getting to old for this" factor keep me from going to as many concerts in the future? Am I doomed to only attend concerts for bands that were big in the 90's? Or, will I quit going to concerts altogether? The answer 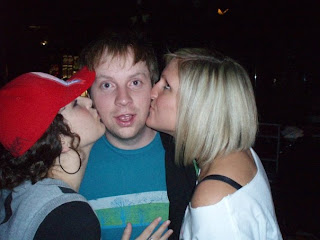 remains to be seen, I mean I am going to 3 concerts between now and March 15th. But up until last night the only reason I have ever had not to go to concerts is the feeling of failure I feel because I never became a Rock Star... and the ringing ears I have to deal with till around 4pm the following day. (which, if I remember ear plugs is a problem of the past.) The only thing that is certain is that I'll always like mosh pits, even if that means a 250 lb 17 year old knocks me on my butt (broke my ankle last May in a mosh pit) and whether moshing, dancing, standing or sitting, I do love live music.
John Maxim
at Thursday, February 07, 2008

Same old John. Always so refreshing. I changed my blog address, it is thesearethedaysfam.blogspot.com
Maybe you wanted to know, maybe you didn't. I still told you anyway.

If you're that into concerts, don't forget to attend the ROCKAPELLA concert in Provo this week. You know... the group that sings Where in the World in Carmen San Diego? They ROCK... apella!

I meaned, "is" Carmen San Diego.