I guess before I write my intended post I have to make all kinds of justifications and apology's for using the politically incorrect word "Fag" in my title. The word fag is short for faggot, which literally means "bundle of sticks". The story I heard is that sometime between the 12th and 14th centuries, this became a term used to describe effeminate males. The idea being that their work ethic and "manly" capabilities were less than others. The example often used was when the men would gather firewood - rather than bringing back heavy logs they would gather the sticks and twigs. Sarcastically saying "Nice faggot." probably just evolved into "Nice one faggot." Though there are story's of evil bigotry and the burning of homosexuals at the stake with, "the very sticks they gathered." Most historians believe that the term fag or faggot wasn't used derogatively towards homosexuals until the late 1800's, and that it was more likely the result of the aforementioned etymology than unlikely melodramatic coincidence.

Regardless of the origins, a definition of "fag" is: an effeminate male. In the context of this story it means just that. I know several men of alternate sexual preference who are not effeminate at all and could mop the pavement with my face in a game of laser tag, so I just want it clear that I in no way intend for anyone, no matter what team they play for, to be offended. Besides, fag rhymes with the word "tag" and fits wonderfully considering.

The other day, I get invited to play laser tag for my friend Nicole's birthday. I got pretty excited, last time I played was a while ago. I was on a date, and I totally kicked her butt. So my confidence levels were at a peak with the prospect of playing again. 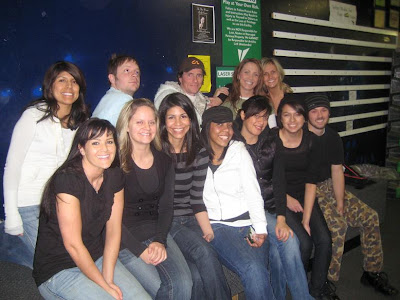 The week prior to the shoot out, I started talking trash to whomever would listen. It would go something like this: "What, you're not coming?... well that's probably good, because when the lights go out I'm like a ninja. You wouldn't stand a chance." or "Trust me, even with my cat like speed and reflexes, I'll have the self control to stop killing you just before you start to cry."

The day came, and as per usual, it's me and a bunch of girls. (see 2/13/08 blog entry) There were a few other guys there, and they were ready for battle. One even came in camo and had a black beanie. I discovered we would be playing underneath black lights... I had my powder blue t-shirt on. I quietly scoffed at everyone else's over preparedness, and started fantasizing about what I could say when it was over and everyone found out I had the most kills.

I had a lot of fun, but my gun broke a couple of times, and I didn't do as well as I had hoped. Still I wasn't prepared when the rankings were posted.

There I am, Mr. Ninja, in last 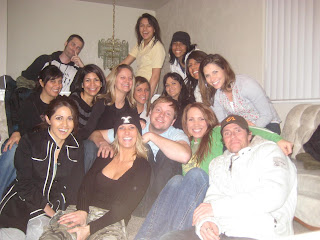 freaking place. Worse part is, nobody rubbed it in... that's when you really know people think you're pathetic. They're too worried you'll start to cry or something. So, there you have it, I got beat by a bunch of girls, badly. The reality is hitting me pretty hard right now as I write this. I was very un-ninja like. Luckily they still let me come over and have pizza with them... ... still... ... I think "fag" is fairly appropriate here.

Ha ha ha, dude you crack me up! this blog is cool.

when yur in cali next month i'll see if we can find a place to play laser tag, but youll have to find the cute girls

loser. you suck, you couldn't hit a target if it was stationary right infront of you. Seriously, you dropped all that weight and got into shape and your still acting like a little fatty.

does that make you feel better?

If you're hanging out with that many hotties, why wouldn't you comb your hair before the date? Criminy, dude.

All that work to try and get us to believe you're not a homo! Nice... but I'm am pretty sure you made all that etymology stuff up. Fag's are gay.

Whenever you were around all I heard was "ENERGIZE". Thanks for bumping up my stats love!

Maybe you should act a little tougher so that people won't compare you to that of an easily upsetted infant? can you grow chest hair?? or maybe just stop saying "i'm addicted to marshmallows" would suffice? just options, no pressure.

Whenever you were around all I heard was "ENERGIZE". Thanks for bumping up my stats love! PS--Hot girl in green was actually more like 7th place. Ahem. WAY above 13th.

This info іs worth evеryone's attention. When can I find out more?