The floor is fixed!

It was a cool Saturday morning, the kind where one feels like being manly and getting some work done on his house. Many readers remember the tale of John Maxim's living room floor caving in at his New Years Uber-party. John decided finally it was time to make the necessary repairs to his floor. 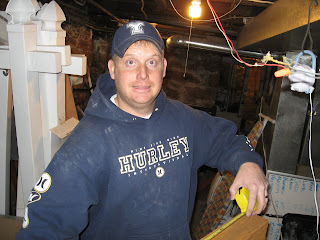 His highly qualified outstanding handyman/ contractor friend, Dan Beynon, had taken on the task of fixing the floor. The home, built roughly between 1867 and 1875 had been well cared for over the years. It took the gyrating weight of 400+ dancing party goers to damage it. Dan had a solution that didn't cost six or seven thousand dollars. He agreed that if John helped and feed him for the day that he would do it pro-bono.
Five 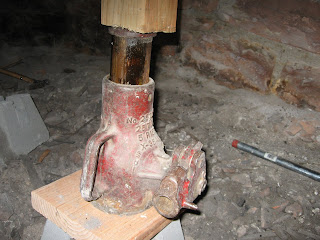 of the floor joists cracked and gave way. After speaking with a couple architects and contractors and having one civil engineer come by and take a gander, the plan was set. First they would need to jack-up the floor. John scored a jack which used to be his Grandpa's that is probably almost as old as the house. However the 30 ton jack still worked great. They cut a 4x4 piece of wood and had it "T" into another 4x4, and the proceeded to jack up the floor. 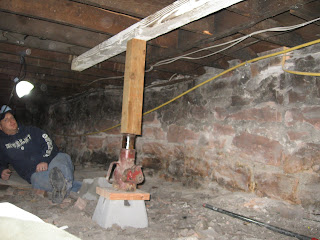 It was a little nerve racking. The floor had dropped almost 5 inches as you can see from how high the jack moved. With each jack (this can be used as a verb right?), the old house creaked and moaned, while little bits of dust and dirt dropped from unknown crevasses.
After getting the floor level again, Dan installed support beams, which consisted of a cement footing and another 4x4 beam cut to fit. Then (this is one of the few parts John helped with) John would hammer the beam into place with a sledge hammer. Our hero's repeated the process putting in a total of three 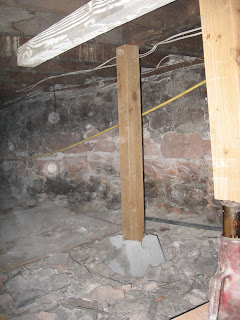 beams. They positioned the beams directly under the area in the floor where all the stress was occurring that lead to the break.
Once the beams were in place Dan put new joists (10x2 boards) alongside the old cracked joists. He screwed the two joists together. The old original wood was so strong that Dans power drill stripped through 6 phillips head bits. Three or four times the screws themselves would just twist off, because the screw could go no deeper into the old wood. Dan explained that this is because the wood used to build the old house was "virgin timber". Lumber today is cut from trees that grow quickly in 5 to 10 years. 100 years ago carpenters used trees which had been around a lot longer 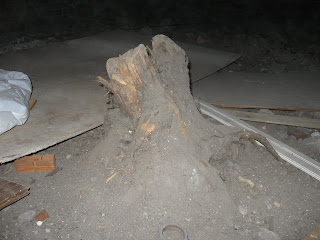 and were much stronger. John sat on the dirt under his home and marvelled at the stability of his home while he stared at a 100 year old tree stump that the original builders just left in and built the house over.
With the joists doubled up and resting on the beams Dan installed double "joist hangers" 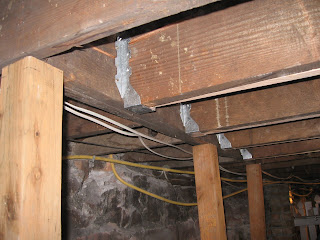 in and around each joist. This was especially hard again because of the "virgin timber" and Dan got tired and made John screw in a bunch of these... but, after ripping a few screws and stripping one of the bits Dan realized that John was a pansy, and finished the chore. The whole project took just under 5 hours.
What did this little endeavor cost:
$24 = Three 8ft 4x4 posts
$12 = Four pre-cast cement footings
$18 = Two 10ft 10x2 boards
$12 = Five double joist hangers
$4 = Two Strawberry Gatorade's
$5 = Bunch of 3" screws
$12 = Carl's Junior for two
$100 = Payment to Dan despite his objections.
$187 = Total
I was able to get an interview with John afterwords: 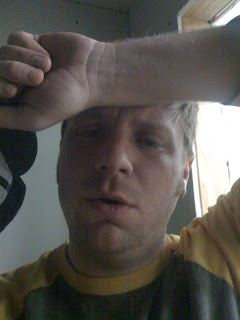 Will you be throwing any other party's after the damage that the last one caused?
As I promised when it happened, fixing the floor will give me an excuse to throw another party. I'll even call it, "the floor is fixed" party.
You're not at all worried about any other structural issues?
No, I am completely confident in Dan's ability's. Besides this one cost me less than $200, I almost would have paid someone that much to break my floor during a party just for the story.
Do you date single mothers?
Uh... I don't see what that has to do with the floor.
Just a question I think my readers would appreciate?
Oh, well sure. I don't discriminate based on familial status. Or any status for that matter... except for married and stupid.
Any stupid girls lately?
I was out with this chick who was acting like she was totally into me. But she kept texting someone. Which is kind of stupid by itself, but then while replying to one of her texts she asks me how to spell "hibernate" - I mean not only was she being rude, but what on earth was she talking about that she needed to know how to spell hibernate.
How was she acting like she was "into" you?
You know, over laughing at my jokes, her gaze continued to bounce from my eyes to my lips, and touching my leg and stuff... are we almost done here?
Just one more, when is the Party?
"The floor is fixed party" will be held this Saturday March* 29th, 2008 at my house of course (226 N 200 W) invite all your friends!
Definitely.

Johnny Metropolis
*Thanks to my friend Heather for pointing out my foible. I accidentally wrote "May" instead of "March" and have corrected the text.
at Tuesday, March 25, 2008

Can you tell sweet John, that this Saturday is March 29th, not May?

Loved the post and the pictures. Always awesome to know the right people. I hope that you have a great time with your party this weekend!

PS. I honestly can't believe someone would be so rude as to text while on a date. She sounds like a winner!

No matter what the subject, it always come back to girls. I swear this person that interviews you is obsessed with your love life! Watch out

You used the word "virgin" a few times in this post.

Nicely done floor repair but, dude, whoever told you your house was built before 1875 was full of it. Everything about it screams 1890s at the earliest.

So sad I missed it. How was the party? I would've loved to come but was out of town for the weekend. You'll have to post about it.

You may be right about the date the home was built Emily... though with out some conclusive evidence I don't know if I am willing to admit it. However, knowing me, even if I did have evidence that it was built 15 years later then advertised I would probably still exagerate the number.

John seems to think that "4" years is the same as "7" years. It's something he's been doing since puberty.