I play on an indoor soccer team. I am a the goal keeper. The position that I play often necessitates me diving and sliding around on the turf. Thus getting "turf burns" or "rasberrys" on my legs in various places. Last night we had a game and I got two big ones. One on my knee, and thanks to my short short's one on the side of my upper thigh. The game got over at 11:30pm and so I got home just before midnight. After playing there is a little too much addrenaline involved for me to just fall asleep. So I popped the next few episodes of "Prison Break" 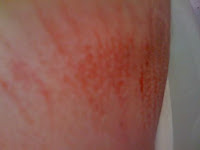 into the DVD. I was pretty tired after the second episode, and decided I would go to bed. I turned off the TV and laid there for a second with every intention of going to bed... then I fell asleep. 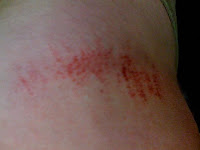 I woke up, on my leather couch 6 hours later. I was still in my soccer clothes. I didn't realize it but my short shorts had kind of ridden up so that my whole leg's bare skin was directly on the leather. I shooed my dogs off the couch so I could get up. As I rolled off the couch I felt this searing pain... kind of like when someone rips duct tape off your skin, but a little worse because it's like ripping flesh instead of ripping hairs. I had laid in the same position so long on the leather couch, that the oozing rasberry on my leg had kind of glued itself to the couch. I yelled 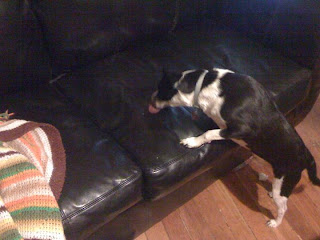 out in pain, I might have even sworn because my dogs got really nervous (which they do when I swear because that means I'm really mad) I stood up and inspected my tender quivering thigh... it looked like it hurt, and it did. Just as the dreadful thought of getting into the shower entered my mind I noticed my dog, Movie, licking off the couch. He had wasted no time in finding my wound residue and licking it up like a side of 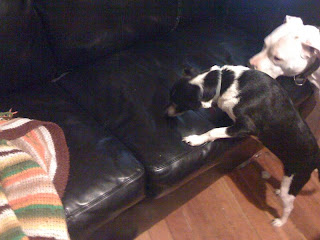 beef. It must have been good too because once my big dog noticed he tried to get in on the action, and my little dog growled at him which he only does if its important. I suppose the moral of the story is not to sleep on leather, vinyl, or plastic, without first wrapping your open wounds. The part about the dogs... well I don't know if there is a moral to that, it was just gross.

I'm cancelling my subscription to your blog.

I agree with Mr. Anonymous. That's freaking disgusting. Why don't you just take a photo of your dogs eating a poop sandwich or maybe a bowl of your scabs with a little powdered sugar sprinkled on top with some Vitamin D milk?

Sorry, that's Miss Anonymous. And no, that is way more disgusting. But that was probably the point, right? You guys are both sick!

Man. I don't think I could look at my dog the same after that. In fact, it may take awhile before I can look at Movie again.

Sick. Have you seen Little Shop of Horrors? I just watched it last week. I hope it's not like that and all he wants is blood now.