For those of you who don't know she is my ultimate Hollywood crush. The only way I can adequately describe her beauty is to say that "she is so beautiful it hurts to look at her." This is my favorite hot girl saying. It trumps "hotter than the sun" and "smoking hot". Sometimes when describing a beautiful girl I will say "Jessica Alba Hot", but that doesn't really work on Jessica Alba.

"Hurts to look at" may seem a little dramatic but it really happens. I will see a girl and I cannot look at her, it is as though my retina's will simply liquefy in "Lost Ark" fashion. I have to consciously look away and not stare at her*. Women like this aren't just movie stars, I usually meet at least one of these girls a year. I have known several: Stacy and Robyn from High School - I dated Emily, Ashley, Heather, and Becky - my ex-wife was one - famous girls of note - Jessica Alba, Kristen Bell, Cameron Diaz & Halle Berry.**

As I watched Jessica in her commercial, I started to think about my current single situation... the first thought that came into my head is "where am I going to find a girl that looks as good as that." I quickly caught myself however... My sanctimonious platitude over the years has been: "Hot girls are a dime a dozen and cool girls are a dime a dozen, but hot cool girls are one in a million." In truth waiting for this "one in a million" girl is not necessary. Physical beauty is not all it's cracked up to be. I of course have several theory's, which I will forbear explaining in detail about how beautiful people (men and women) tend not to develop personalities. After all, they get accepted and loved simply because they are beautiful. I would say of the really beautiful women I have met in the past 10 years, that 1 in 10 is really cool and the rest are boring, one dimensional, and shallow.
Since my divorce, I have met two "hurts to look at girls", one lives too far away for my lazy butt to pursue, and the other I actually went on a couple of dates with, and then stopped. Certainly she was beautiful, but unfortunately (for her) she was boring. A very limited personality, I had to do all the talking and I was the only one making an effort. I don't think it was this girls fault by any means. If I didn't have to be funny for people to like me... well then I wouldn't be. Recently I have met some girls that physically I would only describe as "cute" who after meeting or talking with them I find myself incredibly attracted to. It's a little different for me because seemingly I have always focused solely on physical attributes.
A good example, I remember watching the movie

"Teen Wolf" as a boy. Michael J Fox's character is choosing between the short hair brunette girl who is "cute", and then the blonde girl who is "hot". My dad was watching with me once and said "If you ever have to pick between two girls like that, pick that (the brunette) one." I remember thinking my Dad was 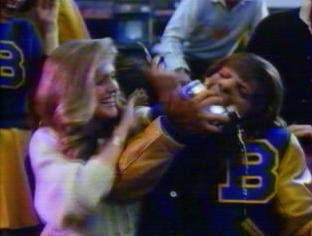 weird and had terrible taste. The blonde was way better looking. I wasn't even attempting to consider the personality back then. As an adult however after having met many girls like the blonde***, I am now starting to see what my Dad was trying to teach me.
So, I suppose the point of this rambling (which is what happens when I force a post) is that if attraction could be measured that personality attraction can be as powerful or more powerful than physica 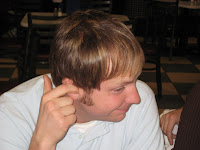 l attraction. After all plenty of girls fall for me, and I'm not a "hurts to look at" kind of guy, I don't even "smoke". Which only makes me realize that there are more options then I before thought. More options usually means more time. Thanks a lot Jessica Alba for helping me come to this conclusion - now I'll never get married.

John Maxim
*This phenomenon plagues women too, google "Wentworth Miller" and you can see thousands of blog posts of women lauding his destructive good looks.
**The author is not alleging that all of the girls listed will be "hurts to look at" quality for all onlookers. These women are the authors personal favorites. He fully understands that it is a matter of personal preference.
***The author is not attacking blonde's, all blonde's are not void of winning personalities. In the example given, the easiest used distinguishing characteristic just happened to be differing hair colors. For a reverse example see TV's "Smallville" characters Chloe (blonde) and Lana (brunette) where the hotness/personality are opposite according to hair color.

Very wise to say that 1 in 10 of the hot girls you've met were also cool.

That way, every hot girl you've met can assume they're also the "cool" one and you don't lose any points with them.

Pearls of wisdom my friend.

I'm with you on all the hotties except Kristen Bell, who's that? She does look hot though.

Men are so superficial. However, I would have to second Wentworth Miller.....SIGH, I almost feel like I'm cheating on my husband watching Prison Break, it is a good thing his acting totally turns me off.

John I knew after you met me, you'd finally realize this!

You want me and every other female to believe that you are finally, finally growing up!

Well, okay... but all the girls I see you with are beautiful, so I don't know I'll ever know.

Those are my sisters, silly.

I must confess, I didn't know who Wentworth Miller was until I googled him just now. I assumed he was a brainless beauty until I read about him and now I'm a little bit in love. Of course that was just one blog. Maybe he's a total creep. Still, I may have to start renting Prison Break -- even if it hurts.

Next time you talk to Jon Madsen ask him to explain his take on the difference between cute girls, beautiful girls, and hot girls.

Jon, I really enjoyed this uber-long post of yours! I have always found this subject quite interesting.

Thanks for the disclaimer regarding blondes...we "blondes-with-personality" are highly misunderstood. ;)

I agree very much with your blog...thanks for the explanation. I was a bit saddened, however, that my picture and name were not on there. JK.

Oh John. I love you- I am glad you are changing and evolving.

You are one of my favorites.

You can have the best of both worlds. I do, but then you were never as good looking as me, so maybe you're right. Kidding

By the way, how far is too far for you to pursue a "hurts to look" chik? If you say Provo I'm gonna kick your ass!

Bye the way, I got to thinking today that I deal with what's called Retinopathy of Prematurity everyday, This is when the retina actually detaches and can cause permanent blindness, caused from over oxygenization from ventilators. I think I would diagnose you maybe with Retinopathy of Immaturity caused from over analylization of women! What do you think?

I like your politically correct - one of every color - photo.
-J.F

So this is late in the game, but I just discovered that you blog stalk me and I wanted to return the favor.

Very insightful John. And thank you for the blond disclaimer. I get sick of people stereotyping me simply for being blond. Seeing as how I most likely fall into the cute category and not the smoking one.

And yes, Wentworth Miller is painfully good looking, and reportedly smart, but his muscles are pretty much painted on (he's too skinny, and am I the only one that knows that he is gay?

Hello everyone! Who knows where to upload the film Avatar?
I even bought the film Avatar for a SMS to http://rsskino.ru/kinofilm/avatar.html , the link was, but download fails, the system will boot quite strange cocoa something.
Men, advise where to normal as quickly download film avatar?

I sell a boat-program which will help you to outwit auction and to win, initially the boat was created for the Scandinavian auction http://internet-aukcion.ru/ but now the program can work with similar auctions: gagen ru, vezetmne ru and with ten.
The program-boat stakes for you, i.e. for this purpose it is not necessary to sit constantly at the monitor. The boat can set time when it is necessary to stake, thus you as much as possible will lower expenses for rates, and as much as possible increase the chances of a victory.

To all clients free updating and support.

The script is written in php5

optimized to work in a continuous loop
check-activation-filling-spam check ..

Updates and support free of charge.

For the first 10 buyers price 70 wmz (your feedback on the software).

Flooding in the subject no! Write to feedback after the purchase.

In my opinion you are not right. I am assured. Let's discuss it. Write to me in PM, we will communicate.