In church a couple of weeks ago the Bishop read 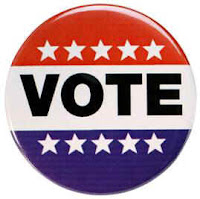 this thing from the First Presidency about how we should go to our district caucuses and support politics and stuff. I had never heard the word caucus and didn't think too much about it. Later in the week I got a phone call from a friend and client of mine. He explained that he was hosting our districts caucus at his home and invited me to come. I politely said I would without fully intending to do so, and then kind of forgot. The day of the caucus I saw this guy walking by my house as I was planting some new grass and he said "See you tonight." So I figured, what the heck, lets see what a caucus is all about.

I show up, and it's clear that even at the age of 30 I am by far the youngest person in the room. Probably the next closest age to mine was 45, but the average was easily 60. Regardless of the spread I saw a lot of familiar faces. I spend a lot of time in my front yard and I'm pretty friendly so I know most my neighbors, not to mention the time I spent in the family ward where I recognized a bunch of these people from.
I get there, and a lady I had never met was in front of the group conducting. She explained that as a group we would be electing delegates to go to State and County conventions to vote on behalf of the district. I thought that sounded easy enough. The conductor lady asked for nominations, it was pretty quiet and it seemed nobody wanted to speak up... noticing the hesitation she said "You can nominate yourself if you'd like to volunteer." then about four hands went up. The woman wrote their names on the board. Then a woman raised her hand and nominated another guy. The conductor lady wrote his name on the board and said "Maybe we should have each person introduce themselves and then we can vote." While she was talking a little old guy who I knew raised his hand and said, "I would like to nominate John Maxim." He smiled at me as though he had done me a favor, and the conductor wrote my name on the board.
Each person stood to introduce themselves, but their introduction was just political, like for example, "I have been involved in politics for 10 years, and I have been a delegate three times before, I know all about the candidates, and will do my best to vote the way you want me too... and stuff like that." This made me relieved because I knew that my intro would be pretty unimpressive in comparison. My turn came last, and I stood and said "I am flattered to be nominated, but this

is my first caucus, in fact I just heard the word caucus for the first time last week. (I awkwardly waited for some laughter here... but it didn't come) I don't know much about the issues or candidates, but I guess if I were elected I would do my best to familiarize myself with everything." I smiled and sat down.
Two delegates were to be chosen, so each of us wrote down two names on a piece of paper and then talked about some other things while they counted the votes... Well, I guess waving at people from your front lawn goes a long way because I got elected! I guess that's what I get for participating for once! Now I have to go spend a whole day at a 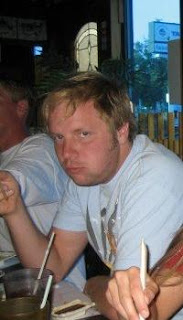 convention where they suggest you make sure you "bring comfortable shoes". Already I have had three candidates call me and talk to me and ask, "what can I do to get your vote?" I'm tempted to tell them that we could shake hands and if some money accidentally falls into mine then they're it, but being so new to politics I'm not sure when that's appropriate. One things for sure, if a room full of adults decides I am best suited to represent them... those who know me well have to wonder what the world is coming to?

Dude... why don't you just go to the dentist and have that offending tooth pulled? You look miserable in that photo. Who cares if you don't have insurance. Do you want to borrow mine? Just move in with me and you can be another one of my dependents.

Now that was entertaining. Good thing I have someone to make me laugh at 2 am. My babies just aren't doin it tonight for me.

I would have to agree with Janey, I think that was by far one of your more entertaining posts. At the same time I feel really bad for you, but I'm not really into politics all that much. I know I'm a horrible person, blah blah blah...

This goes back to our lunch conversation the other day--stuff just happens to you and you don't even try. Who needs college...

let me know when you find out what a caucus is, i would love to know, but dont care enough to do the research myself.

I remember sitting on your front porch talking one day, and eveyone that walked by knew your name and most stopped to talk to you. It was very annoying since we were trying to have a conversation.

Maybe this will teach you to ignore your neighbors like everyone else.

What would've been awesome is if you titled this post "A Hero Emerges Pt. 2"

Maybe people voted for you because you have no prior knowledge; no agenda. Regardless, way to represent the Marmalade District!

I'm sure all the people that were ellected voted for you twice because they were sure you wouldn't win and wanted to better their chances. What a fluke.