Prince, O'Conner, or the Gimmes

A few weeks after my divorce (December 06*), I was having a pretty difficult time. I spent a lot of time on my own. As is showcased in many movies and television shows music became my best friend. Mostly depressing - feel sorry for myself - type of music.

I distinctively remember an experiance I had one day. I was standing in my living room, I had been crying most of the day. I had only my underwear on and I was looking at myself in the mirror over my fireplace. I was holding a 2-liter of half drunk Mountain Dew. I was looking at my bare stomach

and it's lack of muscle definition, my mind wandered, and I wondered if my belly button was symmetrical... then of course I thought something self depreciating like, "Who cares if its symmetrical, nobody will ever love me anyway."
That's about the time that the song "Nothing Compares 2 U" started blaring on my stereo. You may have heard this song from the original version sung by "Prince", or overwhelmingly more likely you heard the more popular version made famous by "Sinead O'Conner". I happened to be listening to the more recent cover by "Me First and the Gimme Gimmes". I knew the song, but with my current state of emotion I was carefully listening to the lyrics of songs in hopes that I could find an artist who could adequately describe my pain and anguish, and hopefully validate all of my sorrows. While still standing there, instead of relating to the singer, I thought... what a pathetic loser (the singer... not me)! Even though, at the time of this experience I believed that no one ever would compare to my ex-wife, and it seemed that a song titled "nothing compares 2 U" would fit me perfectly. It was all very whiny, I found the singer kind of disgusting and thought I need to make sure I'm not like this sap...
The song played on, and I listened as this line played out, "...all the flowers that you planted mama, in the back yard, all died when you went away..." I looked around and noticed the 4 potted plants that sat in that room. I noticed how already after the last months tumultuous events the plants had been neglected and were starting to wilt. I had never cared for the plants, that was Lara's thing. I thought about the other two plants in the kitchen. I set down my soda, and ran over to the computer to rewind the song, I listened to that line again as if to reinforce what I was about to resolve to do. I would make certain that those plants would not die! The plants health would be a symbol of my triumph over pain and heartache. I was so excited about my new hobby that I watered all of the plants and even took a shower after days of wallowing... I think, despite it being so trivial, that it was the first day after losing our son, that I felt like there was some actual purpose to my life. 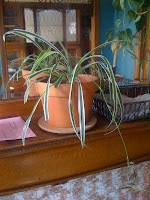 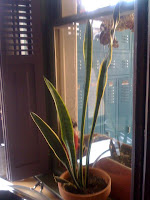 I am happy to report that all of the plants are still alive. Mostly. The one pictured to the left was the furthest down the road of death, and it is now one of the healthiest. The one on the right has grown 8 1/2 inches since that day. 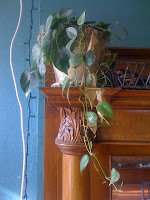 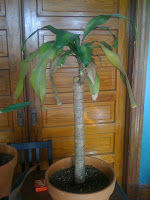 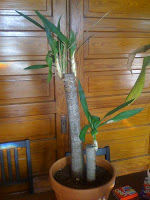 These three always look bad, they have never fully recovered, but haven't died either... I replanted each one in better soil and with clay pots, but they still haven't improved. If anyone has any tips or pointers on this I could probably use them. 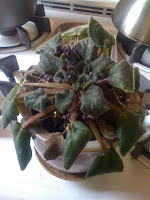 This poor thing is the one I am worried about, It even bloomed with little flowers this winter, but now no matter what I try it seems like it's giving up.
If I lose one or two, it's been nearly 18 months since she went away, and I can now happily sing "...all the potted plants that you planted mama, in the front room, still live even to this day..." Cheesy? yeah, I know.
I look back on that day though, when I was feeling cold and lonely, standing in my underwear, and I'm glad that Prince wrote that cheesy sad song, whose lyrics I could despise enough to start me on my own personal road to recovery and remind me that I don't care if my belly button is symmetrical cause I'm wicked awesome just the way I am.

* = Originally the author typed '07 when '06 was intended. John would like to thank Quela for pointing out this grievous error.
at Wednesday, April 23, 2008

Well done! I'm so glad they made it (and you too)!! I am NOT a green thumb, so I am seriously impressed.

What a heartfelt story. It's amazing how little things like a plant can change life perspective. Thanks for sharing John.

I have a tip. Replace the one that's almost dead with a plastic plant. Nobody has to know and you can keep watering it like you would a real plant.

You could even make up a verse about how the plastic plant is kinda like you. Even when you neglect it, fail to water it... even spray it with Round-up... it continues to flourish and always looks great (and symmetrical).

You would TOTALLY be one-upping Prince.

Good job on the plants. I'm proud of you.
And just fyi, you got divorced in 06.
Didn't you?

You should definitely use this story in one of your Sunday School lessons. In fact, I can't believe I haven't heard you use it already.

Hey Q. I think she left around Thanksgiving of '06, but the divorce paperwork wasn't finalized until Feb or Mar of '07.

Great story!! I don't know much about botany, I'm suprised I even know that's what it's called, but I think that if you put the dying plant that is on the stove in a new pot it will flourish and come back to life!! I could be wrong but it's worth a shot. I'm sorry your belly button isn't symetrical, that's really gotta suck!!

Your right Quela, Lara left on November 20th 2006, and yes Cameron my divorce wasn't finalized until March of 07'. This experience did happen in Dec. 06', 07 was a typo, but if I correct it now your comments wouldn't make any sense.

Way to mention the Gimme Gimmes so everyone doesn't think you a homo. I for one am not so easily decieved.

...and I'm not just saying that because of the naked torso shot.

Are you talking about the shape of your belly button being symmetrical, or its placement within your abdomen?

Also, I always thought the line in that song that went - "I can eat my dinner in a fancy restaurant but nothing, nothing can take away these blues" - was kind of stupid, I mean are we supposed to think that possibly, if your dumped, going to the Roof, or Ruth Chris' is just going to make you feel cool about having your heart broken. It should have said "I can drink a fifth of vodka but nothing can take away these blue." Everyone knows liquor makes you happy, right?
-Chelsea

Well, good work on the clay pots -- now they can breathe. You're halfway there! They look happier.

I have a sad plant that resembles the one in your picture. It struggles, but I'm consistent with it's care so its surviving. When I moved into this house I found some electric blue powder in the basement. Apparently it's plant food. And apparently it works. My plants seem to be doing pretty well. I'm happy to let you borrow if you want to give it a try.

i'll give props to prince for writing the song, but his version is totally unlistenable.

i've never actually heard the me first version, but based on previous listenings to that band i'm pretty sure i can imagine EXACTLY how their version sounds.

Yeah I'm worried about that last plant too. You may just have to call "time of death"! 4 out of 5 is not bad-I feel you can sing those lyrics with great pride!

Jon this is your blog stalker again, I'm just wondering where is your underwear??