A few years ago, it became clear that I could 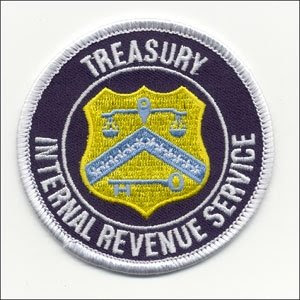 not do my own taxes. With my business, 1099's, write offs and stuff like that, the software program that most of the rest of you use makes my head spin. So off of a referral from one of my friends I met my CPA who I'll call "Taxman". He has the uncanny ability to make my personal tax liability not so difficult to swallow. When my friend first referred me he said that the man worked wonders with making the amount of taxes he had to pay shrink significantly, but warned me that this guy was one of a kind. I was able this year to document my experience.

When I arrived at his house I saw two Men come out the front door who had beaming smiles on their faces. They were carrying manilla envelopes and stacks of papers, but laughing with one another as though they had just shared a joke. When I passed them I said "Was it a good year?" One of them nodded and said "Thanks to Taxman it was." I knocked on the door, and after about four minutes I tried the nob. It was unlocked. I walked into the entryway and said, "Hello?" I could hear the faint sound of a TV off in some distant room but there was no response. The smell was pungent, it was almost tangible, like I could have taken a handful for later. As I walked into the house I noticed I had kicked something on the floor... I looked down, and there lay a half eaten chicken drumstick. I knew Taxman officed out of his basement so I headed for

the stairs. I thought I heard someone walking in the kitchen as I walked by, I looked but only saw 3 cats eating out of the 5 dishes on the kitchen floor. I started down the stairs, and the stench of stale person mixed with cat and maybe a faint poop smell got thicker as I descended. Another cat passed me on it's way upstairs.
I 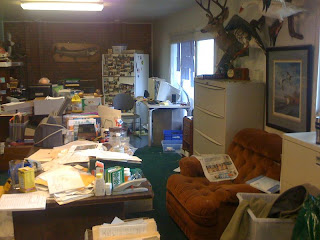 rounded the corner at the bottom of the stairs the room was a mess, papers and file piled and strewn over three desks and all over the floor. At the first desk sat Taxman. He was sporting a thermal shirt some pajama pants and these rainbow slippers (pictured at bottom of paragraph). He takes the "disheveled look" very seriously during tax season. I said "Hey Taxman." and he didn't acknowledge me at all. I sat down in front of him, and noticed he had his headset on. I thought maybe someone was talking to him. So I waited. While I waited I began to scan the room and look at all of the dead animals mounted on the walls. I counted them, 14 fowl, 9 fish, and 6 deer/elk. I looked at Taxman realizing he hadn't made even the slightest movement. I noticed his eyes were closed. Was he asleep? "Taxman." I said again. 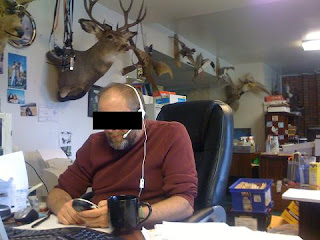 His eyes opened up and he said, as though he hadn't been asleep at all, "Hey Maxim, heh heh heh, time to do some taxes, eh?"
We went over my years various debits and credits. He would often tangent off, I was there for about 2 hours and (no exaggeration) 20 minutes was spent talking about tax stuff the rest covered golf, fishing, a few off color Mormon jokes (Taxman quote - "I hate the Mormons but you're a cool guy Maxim") and we spent at least half an hour talking about why he thought at least every Male should experience divorce once in their lives. He was on his fourth wife. I looked at the ground, 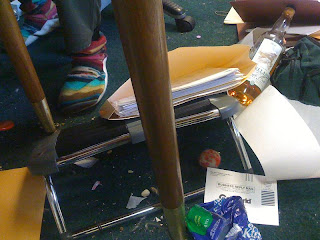 and noticed the mess. I couldn't help but see the half drank bottle of whiskey on the floor next to someones W-2's and two open mostly eaten cans of cat food. Then I heard snoring. I looked up and Taxman had actually fallen asleep.
I took this opportunity to venture to the restroom which was surprisingly clean. On my way back Taxman said, "Just printing off your returns." then he began to ask me about Oregon's Columbia River Gorge, since I had grown up there and because that is where he was going on a 2 month fishing trip at 8am tomorrow. As walked back to my seat and started to answer his question, I noticed the poop. 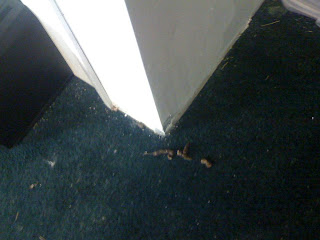 Actual dried (at least three days old) cat poop on the carpet directly behind where I had been sitting. I mentioned to Taxman that I think one of his cats had left something over here, his reply was, "We all got to shit somewhere."
Personal tax returns = $160
Business tax returns = $200
Spending 2 quality hours with one of the most eccentric individuals I have ever met...
John Maxim
at Friday, April 18, 2008

Being a tax professional myself, everytime I hear someone say their tax guy can get them a "good deal" I cringe. You will probably want to keep track of your Taxman for the next few years because if he moves into the woods and you get audited, you're going to want to be able to find him.

P.S. I threw up in my mouth while reading your very thorough explanation of the cat poo in the house.

Uh, can you say West Virginia. That was a normal day for me to sit amongst the 5 cats and their poop. The only difference is that it was usually a trailer and the animals on the wall must have reach mid room so there was no room to walk

Good taxman or bad taxman... either way, I'm not sure I'd trust anyone with clearly visible cat crap in the same room where sleep and eat. But maybe that's just me.

That's just nasty. I might have just turned around and gone home before he realized I was there.

Oh hey, I made Super Ramen today and it was sooooo good!

Only you would have a story that great, you make me laugh so much, you and Cameron truly are the funniest two people I have ever known in my entire life. I just love you!

so can i get your taxman's number? sounds awesome!