Who's got the clicker?

These are my dogs. Many have had the opportunity to meet them, and many have not. For those who don't know them, "Movie" is the little black one, and "Vodka" is the big White one. It may look like they are having a conversation in this photo, and well, that's because they are. 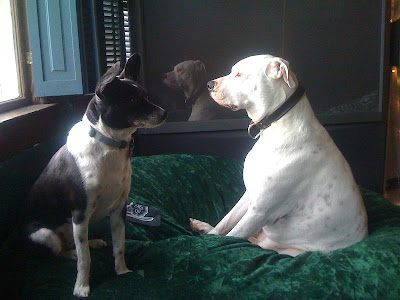 VODKA: He's holding up that little black thing that smells like his hands again.
MOVIE: Yeah, Sometimes I think there is something wrong with him, maybe he's retarded?
VODKA: I probably would have argued that point with you, but yesterday he spent 5 whole hours with a girl and never even sniffed her - you know where.
Then they spoke in "dog" the rest of the time so I couldn't understand what else they were saying.

I have noticed lately that Vodka watches TV, very intently. 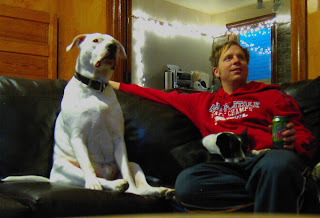 My brother Josh moved in with me and built this really cool projector screen so that now we have a 9' picture in the room. Prior to this super HD Cinematic viewing experience, I did have a pretty nice 60" screen... but Vodka obviously will only settle for the very best because he never used to watch TV. Sometimes I'll come into the room and he'll be the only one in there.

VODKA: Oh just the "Dog Whisperer", you should see this chihuahua that Caesar is working over this episode, heh heh, what a moron. 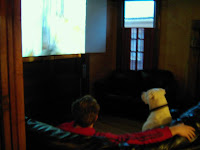 He likes all kinds of shows though, including Soccer, Basketball, Survivor Man, and Wildest Police Chases. He hates "The Bachelor" and "The Hills", but I'd probably make fun of him if he didn't, so thats good.

I could have sworn in the movie "Turner & Hooch" that the vet say's "Dogs can't see two dimensional pictures." When asked if the dog could identify the killer. What do I know though, he's definatley watching TV. Perhaps it's because he's 42 now in dog years, and can appreciate good television, or he can see things better because the picture is so big, or because the image is projected, or possibly it's because of the HD, but it's really funny to see him doing it, and kind of fun to always have someone to watch TV with. Even these pictures don't do it justice.

That is just precious!

I surprised Vodka doesn't have an opened can of Mountain Dew sitting next to him.

I bet dogs really do smell stuff like our hands on our cell phones and stuff.

Yes, cute dogs. And I'm so glad I got to share that special experience on FrontRunner with you last night. And that you got to be my verbal punching bag when we got off the train and I was so pissed. And then you talked about sweating in certain places and I just about puked. Thank you.

Does Vodka like V Mars? If so, he is one classy dog. Which dog is the one that ate your scab. That still makes me sick to think about.

"I heard" that dogs see things faster then we (humans) do... not exactly sure what that means, but aparently when they look at older TV's the image moves too slow and it looks like a series of photo's which they cant really see. On newer TV's with higher resolution 1080i and stuff they move fast enough that the dog actually see's it as a fluid moving image. More like seeing a shadow then an actaul image, but they see it none the less. Then again they dude who told me that is usually full of it.

I was gonna say, "Where's Vodka's Mountain Dew?" But then I thought maybe you two shared a can. You're close like that.

I didn't realize Vodka watched so much T.V. no wonder he's so fat.

John-
the only thing missing in these pictures is you making out with vodka. You should try it, he's a good kisser!

I love the dog conversations!