Today is my son... or former son... or former adopted son's 2nd birthday. I'm not sure what his appropriate title should be. I guess I could call him the "kid I tried to adopt but didn't quite make it." or "that boy I babysat for 7 months between him 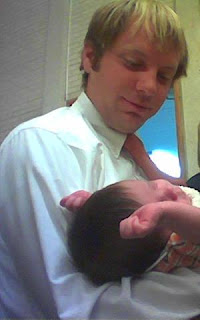 being born and him being placed with his new family." It does give cause for lots of further explanation when I refer to him as "my son", since, well, I don't have a son. People just getting to know me have to hear the whole story. Which means I have to tell it all over again...
HOTTIE: Oh my gosh, the baby in that picture with you is the cutest little boy I have ever seen. Who is he?
JOHN: That's my son.
HOTTIE: You have a son? Where is he?
JOHN: Well, after my divorce, he uh, doesn't live with me any more.
HOTTIE: You're divorced? Do you ever get to see him?
JOHN: Well actually (insert whole story here)
HOTTIE: Oh...
Then the doorstep scene ends up being some awkward hug where I get a couple of pats on the back which communicates to me "You're a nice guy and all, but I can do better than a 30 year old divorcee with mediocre looks and some serious baggage." To which I respond by walking away and never calling her again.
Man, where is this post going?... Anyway, whether appropriate or not I just like to call him my son. His Birthday was today. Many of you who read this blog were with me when everything went down nearly a year and a half ago. My new friends have also heard "the whole story" in some variation of the above example. Though I am still not to a point where I think that everything that happened was the best case scenario, all things considered, I feel very good about where everything is at right now... all things considered. I could elaborate on all the things I'm considering when I say "all things considered", but I type way to slow for that. What I'm trying to say, is that things are as good as the possibly could be.
Since giving Roe to his new family, they have been very good about sending pictures and updates to me. I'm glad to report that he looks happy and healthy. 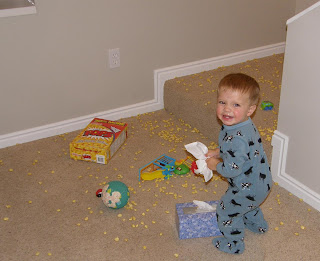 During the adoption, as I would tell you, my friends about the many events leading up to his birth, more than once you would say, "you should write that down." I did, and have posted it to this blog. It is a series I call, "The Adoption Chronicles" I have posted each entry under the date it was written, it all happened starting in March of 2006. There are over 30 entry's... Most of my writing tends to lean towards the humorous, and if that's why you read, well, you may find these a little boring. So this may not be for the random blog stalker or someone who only scans my blog on occasion, though you're welcome to it. The commitment is big enough that I suggest you don't even start unless you're really interested or really bored. In any case it has now been posted... There are about 10 more entries after his birth that I have yet to post, it takes time though, I will try to have them up in the next couple of week's.
Happy Birthday to Roe (now named Hawken) and thank you friends and family, for all your support over the past months.
John Maxim
at Monday, May 12, 2008

That was a really sweet post. I kind of got a little teary. Darn you Maxim, everytime I start to think you have no soul, you post something like this and make me think you are a good person.

Thanks for the heads up on the adoption chronicles. This time I'll read it when no one is around to see me cry.

I like Roe better then Hawkin- So I am not just a random blog stalker and I read your blog more then just on occasion- oh and I like to see the serious side of you for a change- I might just cry for the second time this year!

I hope you knock some hottie up with like sixtuplets and have tonz of little runts to chase around!! I don't even really know you but i have thought of this whole event and adoption situation many times after I learned about it. It makes me very sad to think about. I would definitely still call him my son. but then again i would still be at home in the fetal position in my bed. and you didnt just babysit him for 7 months, you loved him and cared for him and babies feel that.

Don't you think you should thank the people who helped you the most by name? I'm just sayin'.

And don't try to be funny by leaving me off the list, you savage.

By the way... I got a little choked up when I read the last sentence of Rachelle's comment. Dangit, RedDawg.

So I have read all the way up till Volume 27! (I was getting paid the whole time so I'm not a total loser) I remember when you bore your testimony in church about that car accident... that is an amazing story.

You should seriously talk to an editor or someone about turning this story into a book.

I should finish what you have up so far tomorrow, and can't wait for the "post-birth" stuff since thats where all the serious drama starts to come in.

So sorry about Monday when I asked you 27 times if everything was ok!

I'm sure you were a phenomenal dad and even though Roe isn't an every day part of you life, he is still your son. You had first dibs!

I was laid up in bed all night last night with a bad back, so I had time to read through all the adoption chronicles. That's an amazing story. What a miracle-you and Roe must have really needed to be together, even if it was just for a short time. I was really impressed with your faith and maturity as I read through the story. I am really sorry things didn't turn out the way you would have liked. I guess some day we will understand why things happen the way they do, but in the meantime it's just painful. You're an amazing guy, sorry the last few years have been really rough for you. Remind me to give you a hug next time I see you.

This text is sweet, evidenced by all the ladies and their pining for you.

So far overlooked is the humor, I love the "HOTTIE" scenario, I bet in Utah that's more true than false. My favorite part is this sentance:

"I could elaborate on all the things I'm considering when I say "all things considered" but..."

I'm glad you wrote all this down.

John, my wife, Ariel, and I discovered your blog when a co-worker of hers was laughing at it once. (Sarah Monroe?) We love it and hope you keep it up.
This post was amazing. I know we are strangers, but we are considering adoption and would really love to talk with you more about your experiance.
rogerakaroger@gmail.com.

Hi John... It is nice to hear your adoption experience, and to see the love you have for your son. As you know, Devin and I are trying to adopt, so it is cool to hear real stories. How did y'all get in touch w/ Nikki in the first place since you weren't approved yet w/ LDSFS? And what happened to the name Danger?

Good for you for writing all of this down. I'm sure he will one day appreciate it, as you were an amazing father to him.

I'll never forget you out mowing your lawn with little Roe in a sling. You are such a great dad. We love you John!

To answer your questions, Devin and Amanda, My sister was Nikki's young womans advisor when the family Nikki had originally picked backed out, so she mentioned to her that we had been looking to adopt and thats how we met.

Danger is a great name, We were actually thinking of Danger Moses Maxim. Just changed our minds. It's still one which I will possibly attempt again if I ever get to name aother kid.

John, I honestly cry everytime I even think about your whole situation. The fact that Roe was born on my birthday reminds me every year of how amazing you are for not going off the deep end. I hold so much admoration for you and how you handled everything. I don't know if I could have done it the courageous way you did. You were an amazing dad to Roe and you will be again, someday to future children. (ps. i still think Roe looks like you)
~Cristina