A gas tank in the life of John Maxim: Day One 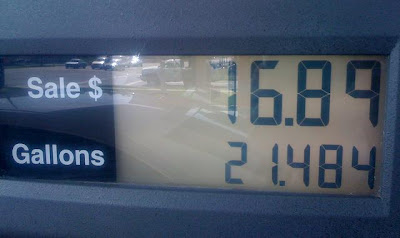 at 10:33am
after traveling 8.2 miles
I arrived at 4500 South off ramp
I was supposed to go to Bountiful for a meeting. Somewhere around the freeway on ramp at 600 south, my thoughts (which consisted of me musing what I might actually do if I somehow got to go on a date with Kristen Bell of "Veronica Mars" fame) distracted me and I got on going south (the opposite direction to Bountiful) I became aware of this after traveling 35 blocks and got off at the next exit to make a U-turn and headed to Bountiful.

at 12:11pm
I traveled 8.5 miles
I arrived Home
A girl at Equity Solutions pointed out at some point during my meeting that my shoes definitely didn’t match the rest of my “outfit”. She brought it up a couple of times, I didn’t even know I was wearing an "outfit," but I felt self conscious and went home and put on some flip flops. (those match everything don’t they?) Left at 12:14pm

at 12:33pm
after traveling 15.1 miles
I arrived at the Department of Workforce Services in Sandy.
I picked up my friend Grace who is looking for a new job and we went to lunch.

at 12:40pm
after traveling 2.1 miles
We arrived at Café Rio
I got the Steak Quesadilla with a side of creamy tomatillo dressing for dipping. Mmmm it was good, I ate the whole thing, which I seldom do. Grace got a chicken salad. We talked about regrets… it wasn’t as depressing as it sounds, it was a good talk. We left at 1:27pm.

at 1:34pm
after traveling 2.1 miles
We arrived at the Department of Workforce Services
Dropped Grace off, gave her the "perfect hug" and headed to work.

at 1:50pm
after traveling 4.1 miles
I arrived at My Office in West Jordan
I Worked. For work, I deal with peoples sensitive 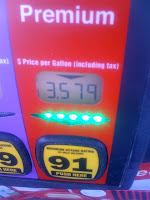 financial information. I grabbed this individuals on Wednesday and promised they would have them back by today... well I forgot to overnight them, so I figured I would just take them down there, and be a man of my word. Left the office at 4:10pm

at 4:44pm
after traveling 29.8 miles
I arrived at the Serve Pro office in Pleasant Grove
I dropped off the paperwork, chewed the fat for a bit and then headed back. Left at 4:51pm

at 5:40pm
after traveling 41.8 miles
I arrived at the Supersonic Car Wash in Salt Lake
It was too full so I pulled into the parking lot and pulled right back out.

at 5:45pm
after traveling 1.1 miles
I arrived at one of my rental properties (which happens to be two houses away from my home)
I met with some people interested in renting the house. We did a walk through, and they said they would take it. I informed them I was trying to sell it, and they didn't mind. We put it on a month to month arrangement, then I walked home. I was having a party for a friend at my house and for some reason it was imperative that we have karaoke... no one had confirmed that they had gotten a machine so I called my brother-in-law to borrow his. I left at 6:26pm to get it.

at 6:54pm
after traveling 21.1 miles
I arrived at the intersection of 7755 S and 1300 E
I got a call from My friend Nicole who told me that Anmaree had gotten a karaoke machine. So I turned around and went home. (talk about a retarded day to pick to chronicle my gas usage/wastage)

(On the drive out I took I-15 to I-80 eastbound which turns into I-215, and got off at the Union Park exit, on the way home I took I-215 west to I-80 eastbound, to I-15, I wouldn't have known this otherwise, but the second way was 1.8 miles shorter and 6 minutes faster!)
We played guitar hero and did some karaoke

it was fun, the highlight of the evening was me and my brothers rendition of "Livin' On A Prayer" by Bon Jovi. I also laid the flirt really thick on this hotty named Tracey and managed to secure myself a date the following day! Crappy thing is, she is moving to Nevada in two weeks.
After the party, everyone left around 2am, I discovered my little dog, Movie, had escaped the confines of my back yard. Vodka, my other dog, and I jumped on the skateboard and looked for Movie for about 30 minutes. That didn't work, so I decided to jump in my car and widen the search area. I left my house at 2:56am.

at 3:55am
after traveling 8.2 miles
I arrived back home

Having not found my dog. I very slowly drove around a 6 block radius of my house, to no avail. Movie gets out a lot, he is little, and figures out ways to squeeze out of seemingly inconsequential holes. He knows where we live, and always comes home on his own after a few hours though, so I was a little concerned, but not enough to not fall asleep anyway.

The most disturbing thing about this post is the fact that this was only one month ago, and you got premium gas. Its gone up by 50 cents a gallon since then!

I concur with el shake above. Audis require babying, which is even more crazy uncheap lately. Sorry, dude...

I see you have August Rush on your Netflix movies at home. I hope you like it. Eventhough it's the cheesiest movie ever, I loved it.

There had better be a day two which finishes the Movie story. I can't believe you went to bed.

Oh my word! You better find that puppy. Let me know if you need help.

Since when does the day end at 3:55am? Looks like you've already started day 2

You and your love affair with Veronica Mars cracks me up.

I'm sure you singing "Like a Virgin" would have been a bigger highlight then Bon Jovi.

I must confess, I began skimming this post once it started to sound like a story problem.

But I was able to secure an image of you on a skateboard with Vodka and that made it all worth it.

Let me know what you think about August Rush. I had high expectations because I love all the people in it. But I thought it was kind of really bad.