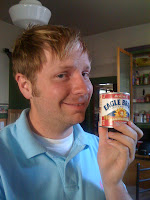 There have been some major complaints that I need to post more often. I will make a valiant effort in the future, but sometimes blogging doesn't fit into my daily list of priorities, and as of late that has been happening more often. I'm not saying that I am busier or cooler than you my faithful readers, lately everyone seems to take things I say a little too personal. I think most of you should blog more often too - we all should... I noticed my friend Adam has been trying a little harder (two posts in one week) since I put his blog in the bottom of my link lists under "Blog pals who don't post often enough to be linked further up on this page!" In any case I am doing my best and will attempt to make my best better.

I was listening to that song "If" by the band "Bread" this morning as I drove into work, and the first line is "If a picture paints a thousand words then why can't I paint you?" It made me think it may be a good idea to just post a few pictures of the things that have been going on rather than writing about them... then the song went on to say "And when my love for life is running dry, You come and pour yourself on me." It made me think, what is that supposed to mean, maybe bread doesn't know what they're talking about... then I started thinking about something else - and when I sat down to write my post I couldn't come up with a better idea so here are some pics. 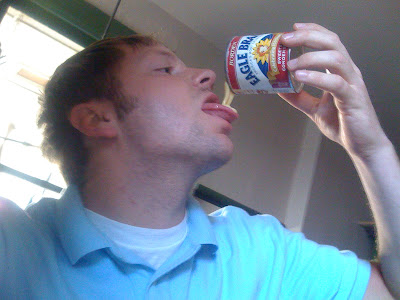 So, I started a new diet of sorts (I will post about it in greater detail later on), which excludes several of the foods I used to eat. When I decided to do it, I thought I would simply eat everything in my cupboards. Which consisted of a lot tomato soup and corn and stuff. It took me about a week, and the last thing which... I don't even know what it is, was this condensed milk. Yes I ate it, and though it was disgusting I didn't get too sick, just some runny poo the following day. 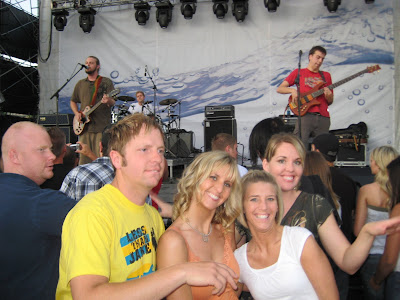 One of the many benefits of living downtown is that there are many things to do during the summer that are very close to home. Including the Utah Art Festival. I went with a bunch of friends because a band that I like was playing there. I was surprised at all of the cool stuff they had there like poetry readings, hot girls to look at, and creative garden gnomes, not to mention the 5 stages which had different kinds of music playing, at nearly all times. It was pretty cool, while at the Passafire concert this is a picture of me dancing... it looks worse if you see it in real life. 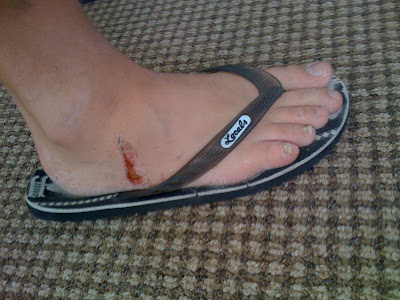 While mowing the lawn, barefoot, I sustained this injury. I think when my Dad continued to verbally frown on this practice growing up, he was worried that my foot might slip under the mower and be chopped into pieces. I always thought this was preposterous and when I became my own man I have mowed barefoot for the last 8 years without event - until now. When I was moving the mower from the backyard to the front. I had to hold open my gate and push the mower through with one hand. The mower was too close to the gate to open it so with out consciously deciding I just proceeded to push the mower back a few inches with the side of my bare foot. After running for only 5 to 10 minutes the exhaust was hot enough to melt my flesh... I could see the steam coming off the exhaust as I inspected the mower. I decided to finish the front yard right away so my injury didn't hurt too bad to mow it later... that choice may have gotten it infected cause it looks really bad and hurts more than most of my past wounds. 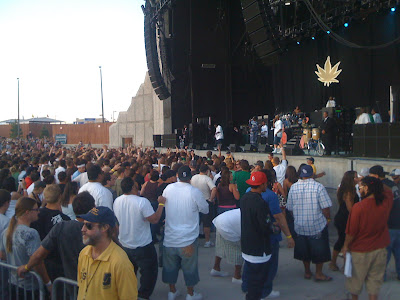 I went to the 311 & Snoop Dogg concert. It was pretty awesome, and I was awesome too. I know its an odd combo, it was called the "Unity Tour" and as you can see from the decoration was all about smoking the herb. The biggest "white" pot smoking band with the biggest "black" pot smoking band definitely makes a statement. I had a lot of fun and despite what many of my friends thought, I decided that Snoop really outdid 311. I may have gotten my burn more infected at this activity because the girl behind, and then the girl next to me spilled their beer on my wound on two seperate occasions... but who knows, it's not like I'm a doctor. 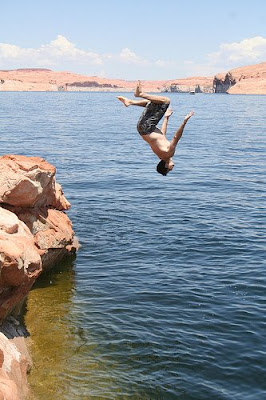 I went to Lake Powell for the 4th of July and pretty much had the most fun ever. In addition to hanging with some very hot girls - one of which was my sister. I got to do a lot of firsts. I have never towed a boat, I did this entire trip, and backed it into the lake between two other boats with nearly expert precision. I also have never driven a boat before, but ended up being the main driver and puller of wake boarders. We had fun did some cliff jumping got some rays and took in the night life (or lack thereof) of Page, AZ. I might have been a little reckless, because we jumped a huge 20 ft wave/wake at full speed in the boat which got everyone mad at me (even though I bet we got like 15 feet of air - it was sweet!), and one of the trailer tires exploded on the way home because I was driving a little too fast too. It was fun and I can't wait to go again. If my foot wound wasn't infected before this trip it definitely was after soaking in the super clean lake for 3 days. 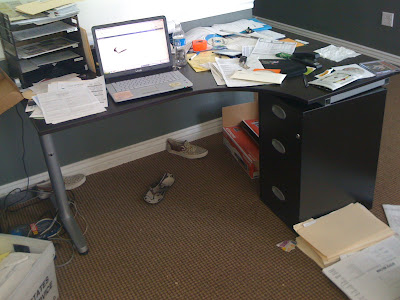 The number one reason I haven't been blogging as often is because of work. I have been doing a lot more of it then ever before. As you can see by my desk (this was after I spent an hour cleaning it) the work is piling up.

Interesting that even though a picture tells a thousand words I still feel compelled to add another 100 or so... What does "Bread" know anyway.

Your post made my already quesy prego stomach, even more quesy, in two different places! Drinking the condensed milk and your nasy wound made my stomach do a flip flop! I love Lake Powell. I've only been once, but had a blast. Glad you have been having some great times lately!

I'm not prego and your post made me queazy.

Is my depth perception off, or are you totally copping a feel on that girl in the dancing picture?

I'm glad to hear you were awesome at that 311 show. The world seems to have a shortage of awesome these days.

This is Brandie again, not Mike. Mike said my comment was confusing, so I need to clarify: Since you were taking pictures to explain the phrases in the Bread song, I thought it would be funny/interesting to see how you would portray (in pictures) the phrase about being two places at one time. I like sweetened condensed milk, but your depiction made me queasy too.

Aren't you a little old to be jumping 20 feet head first into a lake with a gaiping wound shaped like Oklahoma on your foot??? I'd say reckless is an understatmant!

Uh ya the sweet and condensed milk thing was disgusting, next time you run into an extra can of it you can donate it to the food service, give it to a homeless guy, or get a recipe that requires it and make it and eat it. But then I guess that would defeat the whole shock factor purpose right? Sick John sick sick sick

Your foot injury made me less queazy than your 4th and 5th toenails. A little Pedicure goes a long way.

If only you knew you could turn that sweetened condensed milk into caramel. Oh wait, you hate that too. Nevermind.

Yeah...I concur with all above. The foot wound and various possible agents of infections added to the drinking of the Eagle Brand milk is...oye...

I wish I coulda come to pal buddy. Next time I'm for sure in. How about the 24th??

Sounds like Powell was a lot of fun! I'm jelous. I haven't been for years.

Looks like I made it to the bottom of your list- what ...am I going to have to post like four a week to catch up? Do you work out in flip flops? Like ue the eLiptical?!? machine? Just checking- Too bad you didn't have a better story for your wound, like say some awesome motorcycle ride! If your wound is reddened around the outside, has yellow exudate, or is tender to touch with swelling, it is most likely infected and you might want to check into some antibiotics before it turns into something like gang green and you have to ambutate your whole foot- I'm just saying

I really would love to get an invite to Powell if you go again soon.

Some of your friends obviously dont know about you're two "disease-ee toes" as you call them and how you dont care how gross they are!

Seriously everybody I've been trying to get him to fox those for years!

Don't you hate it when you are reminded that what your parents told you growing up really was for your own good!! haha

I'm pretty sure you scratched that hole in your foot! Maybe some rubbing alcohol might make it feel better.

Just boil that can of condensed milk in water for like 3 hours and it is a very soft caramel, perfect for dipping apples! there is a recipe for your next party, even though you hate caramel, others love it!