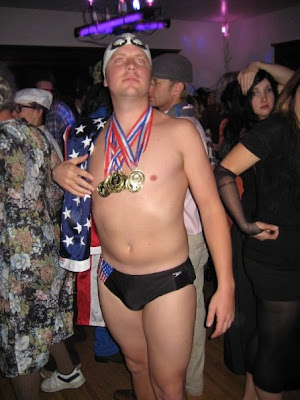 I went to a total of 6 parties in three counties over the week preceeding halloween as Michael Phelps ! It was nothing less than liberating. The protrayal of such a revered figure bares some serious responsibility. 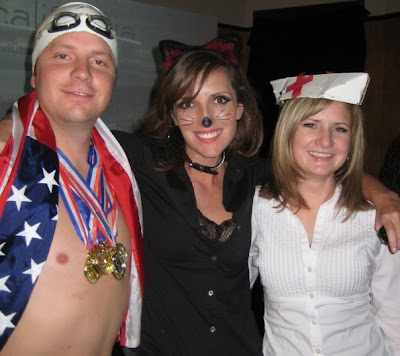 You may think there is a prostetic stomach involved in the costume, but thats just because you are used to seeing me with my clothes on and I buy slim fit tees. It was such a convincing costume, that people were walking up to me saying, "Hey Michael have you seen John Maxim anywhere?" 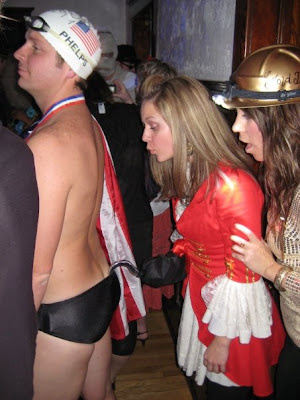 Imodest? I don't see how dressing up like Michael Phelps, An American Icon, can be construed as imodest. Can it? 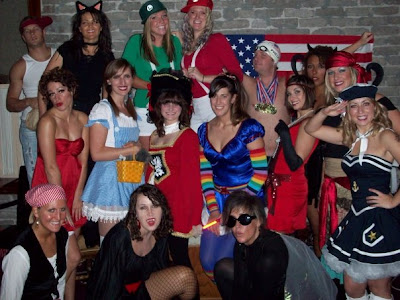 I saw a Michael Phelps at a party last week. Was that you? Probably not. He didn't have as good of a body as I see in these pics.

That's alot of ladies in that last pic. Way to display that flag proudly!

Too many costumes show off the girls body...but never the guys. So I appreciate you going for the gold and being practically naked. It benefits everyone! :)

You and 15 girls! Where are all the other dudes, did they not dress up?

Really, I know you're funny and all, but you're not this cool.

Did I inspire this costume? I seem to remember photoshopping you onto Mark Spitz body over the summer. Of course now I can't find the pic but I'm pretty sure I planted the seeds for this.

Personally, Aaron Piersol is my favorite. But you run a close second. Nice job.

I thought it was totally cool to be seen with Michael Phelps in public...those were real gold medals, right?

PS---The best part was watching all of the dudes faces scan you up and down and.......stop...then look away nervously, before they got caught looking.

I especially like the girl in that first pic who is staring at your bum.

If only I could have been there!

I think the real question is... Did you stuff???

Wow. Those pictures leave me speechless. And typeless.

You have way more guts than I do to go out like that.

awesome costume. that is a tiny speedo. my brother dressed up as michael as well but we made him buy the longer swim trunks!!

Very nice!! And not a trace of hair on your body, either. Impressive! hahaha

I think you need to make out with t wolf again. It would be a sweet Anger Makeout