It was Saturday night. John Maxim had season tickets to the Real Salt Lake game. He originally had a date, but decided that he really didn't want to go out with her so he cancelled, and wondered who he was going to give his extra ticket to.

His roommates were all already going to the game too. He decided to take his friend Ben. The game was fun, as per usual, and being there with another dude wasn't at all like the time he went and saw the chick flick "Return To Me" with just his friend Cameron one Saturday night. The game ended and Real Salt Lake lost... again. It was Ben's first pro soccer game and John always felt a little dumb when he took his friends to games when they lose.

As they were leaving the game, John realized it was really only 9:30. And as they say, the night was young. While they started the trek through the stadium towards where they had parked. They had to walk single file and conversation wasn't ideal. Johns mind wandered thinking about what the rest of the night might have to offer.

Once out of the stadium, Ben says, "Did you see those two hot girls?" John said "No, where?" Ben pointed ahead of them to two figures about 30 yards away. They did indeed looked hot from there. John wasn't sure about Ben's taste, and since they happened to be heading the same direction picked up the pace to insure the females weren't in the "good from far but far from good" category.

There was still crowd going their direction and the girls were a little mixed up as to where they were exactly so John and Ben gained on them a little bit faster then they were intending. They ended up right behind them. Ben was right, they were very attractive (smoking hot)... these were the kind of girls John tried to go out with, even though he wasn't good looking enough for them.

John and Ben didn't say much, and neither did the two hottys. It seemed that both parties were aware of each other, but didn't really want to let on. John tried to force a conversation with Ben about fantasy football, but he and Ben really just kept looking at they're attractive backsides and walking.

It occurred to John that if he or Ben were to say something it might seem a bit creepy. They might think they were following them. Afterall what are two girls alone in the dark likely to think. Neither John or Ben made any attempt to strike up a conversation, and really weren't saying much to each other either.

They had been walking for a whole block and came up to a cross walk. It was one of those crosswalks where all of the lights went green at once. There was still a bit of a crowd, and when the light went green people walked in all directions. Without trying, John and Ben found themselves ahead of the two hotty's, still heading the same direction.

They walked another whole block, just the four of them. 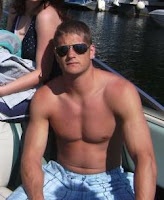 John thought to himself, "Ben is much better looking then me, by at least two points, he'll say something." Well, he didn't. Then John thought, "Perhaps Ben thinks that because I am so funny that I should say something... but what would I say?"

There was another cross walk coming up, were one stategizing a plan of attack, it would be the best time to initiate something. Some lines were running through John's head, like, turning and looking a couple of times kind of nervously and then saying "Um... are you guys following us? What do you want?" Or he thought he could just say, "So, what did your boyfriends do, that you left them at home and came to the game by yourselves?" A few other s popped into his head... but he didn't say anything. He just stood at the corner and stared across the street. 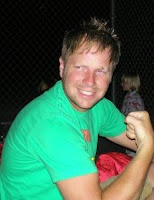 Once John realized he wasn't going to say anything like a big fat coward. He kept hoping Ben would say something. He didn't. After practically walking these girls to their car with out saying a word John and Ben get into Johns car. The girls walk on to their car which was parked just 30 feet away.

"I can't believe we didn't say anything" exclaimed John. "Well I said something at those sprinklers but they didn't respond." replied Ben. "You did? Are you sure they heard you? What did you say? I didn't hear you and I was standing right next to you." John asked. "No, I did, maybe they didn't hear me."

John and Ben hung their heads as the realization of what had just occurred sunk into to their thick cowardly skulls. What do two single guys hope for when they are out? They hope that they will meet two good looking girls. This is exactly what any guy could ever hope for. Two girls - Two really hot girls, alone at a soccer game on a Saturday night. Who happened to leave the stadium at the exact same time as them, and happened to park not 30 feet from where they parked. They were walking the same way for four full blocks and with all of Ben's looks, and all of Johns whit they couldn't even muster a "Hello."

The two men went home and watched TV like a couple of losers, once every 15 minutes or so one of them would lament their poor performance. It was too perfect a set up, it's as if some higher power were handing these two nubile beauty's to them and they just decided to reject the gift. When the Israelites rejected the manna given them the "Lord smote them with a great plague..." One wonders what a great plague is in terms of relationships? I guess John and Ben are going to find out.

That post makes me a little sad. I don't see you as the kind of guy who has any issues approaching women.

Don't feel bad. Lots of guys are shy when it comes to the ladies. Katie had to get me drunk and take advantage of me the first time we kissed. At least I think she did. That's what she told me and that whole night is sort of a blank spot in my mind. You know,this started off as a consolation for being shy, but I think the real message is 'Don't drink around girls that will take advantage of you.' And that's advice we can all use. Am I right or am I right?

I'm pretty sure you've already suffered through your relationship plague. I think you're off the hook.

Oh John! I know it's kinda a sad story but I can't help but laugh. Better luck next time buddy!

I am a surprised that you lack some self confidence. You are extremely funny and Im sure the girls would have been flattered. dont hesitate next time, You got game!

Just blame it all on Ben. Everything is Ben's fault around here!

Nubile...I love it. Am I nubile, John? hahaha

You lost focus because of the hotness factor. "Did you have fun at the game?" would have been the question to ask because it's what you had in common with them. K.I.S.S. buddy.

Whatever you do don't invite girls you just met to drive around with you until you run out of gas or invite them to read blog posts about it.

You lost focus because of the hotness factor. "Did you have fun at the game?" would have been the question to ask because it's what you had in common with them. K.I.S.S. buddy.

Whatever you do don't invite girls you just met to drive around with you until you run out of gas or invite them to read blog posts about it.

I'm sure they went home, watched a chick flick and thought the same things about themselves.
"We are such losers, If we just had the guts to talk to those two hot guys! Man one of them looked like he could crack a joke that would have kept us in stitches all night. I'll bet they thought we were ugly:(! We're never getting laid!"