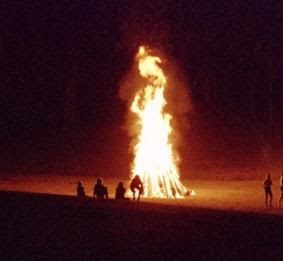 John Maxim's birthday is this week. To celebrate he & his friend Kate are planning a bonfire for this weekend, the big kind where you burn furniture and stuff. Due to housing development over the years the old location that John used to go for this activity now had a few stucco ramblers sitting on it.

John Called his friend the fireman to find out where a good location would be to have his celebratory fire. He said, "Go somewhere in the west desert out past Toole. You got any hick Toole friends? They would probably know of a good spot."

John's friend Beau is from Toole, he wasn't a hick, but John decided to try him anyway, so he texted him.

JOHN: Hey, you're from Toole right?
BEAU: Yeah, Why?
JOHN: I'm looking for somewhere to have a huge bonfire. My fireman buddy told me to find someone from Toole, that they would know somewhere in the west desert where I could do it... do you fit this stereotype, and know of somewhere?
BEAU: I don't know what it says about me, but I know a few spots. When are you planning on it?
JOHN: Awesome! Next weekend. It's my Bday. Got a couple couches to burn, need a secluded spot.
BEAU: What's your email I'll send you a google map shot. 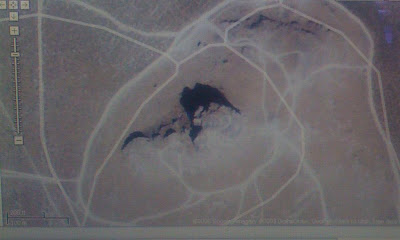 Beau noted in the email: Notice the rock formation next to the spot. It keeps the fire from being visible from I-80.

John told Kate of the location and the invitations went out. 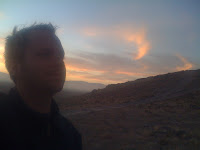 On tuesday John was looking at the directions, and he noticed that they were pretty vague. He decided to drive out there and make sure people wouldn't get lost.

It didn't take long to drive out there, about 35 minutes, but he was glad he did. He saw easily that he could have gotten lost on the drive if he would have made it in the dark for the first time. So John took special notes to make the directions more in depth for those who would follow. 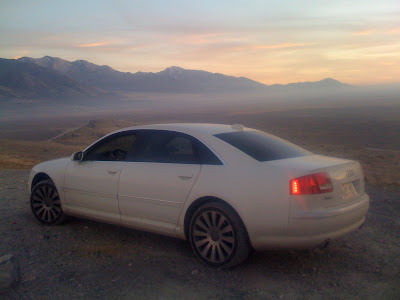 The sun went down really fast, and John ended up lost, he missed a turn and headed south without really being aware of it. He tried to double back, but with the narrow dirt roads he was on it made maneuvering difficult. After nearly an hour in the dark John started to think all he could do was park his car and sleep till morning. Luckily his car's GPS, even though it didn't show any roads, let him know which direction he was going. He was able to follow it east till he found a road, which he eventually did.

Scared and alone John called his friend Cameron to calm him. As he pulled up to the road, there sat a pickup facing him. The pickup had a spotlight and shined it right in Johns face for about 5 minutes. John thought, "that must be a cop" explained the situation to Cameron, and concurred. Then the spotlight turned off and the truck began reversing on the road. This was weird, but John took this as his queue to turn onto the road. Maybe it was just a pickup with a spotlight, a farmer or a rancher? If it was a cop wouldn't it have hit it's lights by now? As John started down the road the truck continued to reverse, matching Johns speed. 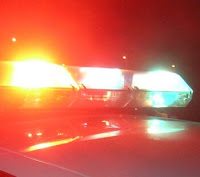 The truck that had been masterfully reversing did the same and turned around. Then they were joined by a 3rd police car.

John pulled over and thought to himself "If this is what happens just from driving around at night then there's no way we can do the bonfire here." Cameron asked him to put the phone on the seat so that he could hear the experience. A siren went of loudly for a split second, so John rolled his window down.

Over an intercom a female VOICE said: driver put your hands outside of the window.

VOICE: Driver if there is a passenger with you please stick your thumbs up.
John didn't know what to do there was no passenger, so he just left his hands there.

VOICE: Driver stick your thumbs up if there is a passenger in your car.

John thought for a second and then slowly put both of his thumbs down.

VOICE: Driver exit the vehicle slowly with your hands up.

John complied. and he started to think about what he was going to say when they asked him what he was doing out here at 10 at night in the middle of nowhere. He concocted a good little yarn he hoped would do the trick.

VOICE: Driver walk around to the back of your vehicle and face the trunk.

VOICE: Kneel down. Interlace your fingers behind your head and remain kneeling.

John can hear someone exit the car to the side of him. It was a male officer.

The man comes up behind John and grabs one of his arms.

JOHN: Am I under arrest?

The man handcuffs John and then steps firmly on the bottom of his foot making certian he is as immoble as possible, and ignores his question.

At this point John decided that when they asked him what he was doing out here that he would just tell the truth. The female cop walks up and asks John if she can search his car. John said yes and notices that she is hot! Not hot-for-a-chick-cop hot, but hot no-matter-what-she-is hot. She searched his car while the other officer grabbs his wallet and starts interrogating him.

COP: What are you doing out here this time of night?
JOHN: This girl sent me an invitation to a campfire and the directions were all crazy and didn't make any sense, so I decided to drive out here and see if I could find the spot she described... I couldn't find anything - got lost and feared I'd have to sleep in my car till morning to find my way home. I was just trying to be prepared you know.
CHICK COP: Can I search your trunk.
JOHN: Sure, yes.

John was glad the hot sherrif was searching his car right infront of him. It was the only silver lining he could think of during the situation. Especially since he knew better than anybody that the fact that he didn't do it had never helped him when he was in handcuffs before. The cop standing on his foot reads his information to dispatch. The female cop finishes searching his car and then walks around in the grass shining her light on the ground as if to look for the supposed gun John had thrown out his window.

John wondered how he knew this, because he didn't think speedometers worked in reverse, but didn't bother questioning the guy since he only started this line of questioning to lighten things up.

JOHN: That was pretty impressive, but I couldn't tell if you were a murderer or a policeman.
COP: I had to wait for back up, and you were playing along...

John notices his knees are starting to hurt from kneeling on the asphault.

JOHN: Um, can I kneel back and rest on my heels?
COP: Hold on.

COP: You can stand up.

John stands and the lady cop walks towards him as the other Cop undoes his handcuffs.

CHICK COP: We had a domestic assult with a gun. Witnesses reported that the suspect drove off with a passenger in this direction in a white Ford Taurus. Someone could have mistaken your car for a Taurus. We are sorry for the inconvienence.
JOHN: No problem, you guys are just doing your jobs.
John wished he had said something like "does this mean I don't get to ride back to the station with you." but he was too much of a coward and knew it of course wouldn't result in anything but some laughter.

As John walked towards his car they asked him one more question.

COP: So what about this party, whats going on?
JOHN: Oh, it's in like 3 weeks and its just a campfire with some friends.
COP: Oh that sounds fun, just be safe.

John grinned as he walked back to his car... that almosted sounded like permission.

You always have the weirdest experiences!

What an exciting birthday!!!

I notice you conveniently left out the reason you didn't hit on the hottie copper... because you were afraid she could smell the poo that had slipped out while they were cuffing you.

Your dedication to planning your parties has always amazed me.

Thats probably why they are always so fun!

I wish I was in town I would totally come.

Thank you for not inviting me on the "party stake-out". I would've been that "2nd passenger" and most likely ended up in the slammer. Way to take it for the team.

All for the sake of a good party.

Who are you? I swear stuff like that just doesn't happen to anyone.

Hoping to make it out for the big event....after Twilight of course.

I'm just glad I made it on the blog and it's not about an awkward date/breakup we had.

A few more months of this economy and you will be driving a white taurus...

That is the friggin' best story I've heard in a LONG time. An awesome way to spend the night before one's birthday...and another story to add to your Sunday School teaching repertoire. ;)

Dude.... So what you're saying is that there is a good chance I can meet this hot female cop if I come to your birthday bonfire? I'm there!

no, there is no need for you to sit through the movie, unless you really want to. however it won't help you figure out my secret. sadly you just have to wait it out.

You have more cop stories than anybody I know! I should probably stay away from you :-)

of course you thought she was hot! Do you go a day without saying that? Hmm for some reason this blog does not surprise me- you ask for it!

That has to be the coolest story of mistaken identity I've ever heard. If it would have happened to me, I would have freaked!

Seriously how does all of this stuff really happen to one person? unreal.