Many of you have seen me limping around or sporting a pair of very stylish crutches. When asked what happened I have thus far responded with two answers depending on the time I feel I have to respond.

Answer 1: Oh nothing, I just use these crutches/walk-with 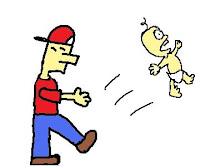 -this limp so that girls will notice me.

Answer 2: There was this orphaned baby in the middle of the street and in order to save it from a speeding Volvo driven by a hooligan youth I ran and kicked the baby across the street out of harms way! Thus injuring my foot.

The real answer is so lame I am embarrassed to even be injured. I was playing football (not soccer) and as I charged the quarterback he broke left, I attempted to give chase, but when I started to turn a sharp excruciating pain affected the bottom left side of my left foot. So strong was the pain, that I collapsed to the ground with out being touched by anyone and then limped home. I have been limping ever since.

I don't have health insurance, however it was clear within the first few hours that this was not the type of injury which I could just "walk off." I was not going to go see the doctor. Two years ago I broke my ankle. I went to the doctor, they took an X-ray, told me it was broken, gave me a walking cast a pair of crutches and told me to stay off of it "till it doesn't hurt anymore." Then they sent me a bill for $1800!

As I lay on my couch nearly in tears I decided I would take an ibuprofen and follow the same advice for this injury. Crutches cost $40 at Wal-mart, and it wasn't my ankle so I didn't need an ankle brace. It was my foot, so I wrapped it in an ace bandage and called it good.

A week later The pain had not gone down much and I started to think perhaps something drastic was amiss. So I did what any other prudent uninsured American would do, I consulted Google. 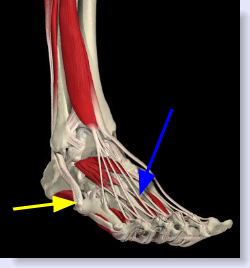 I soon found out about people all over who had suffered almost identical symptoms as I was experiencing. I learned about the Peronius Brevis Tendon. It is located where that yellow arrow is pointing on this diagram. Whoever created us really 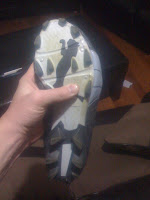 wasn't thinking about where they put this tendon on our body. Or at least they really weren't thinking that we humans were ever going to be wearing shoes or running on cement. Here is what can often happen because of it's location in our foot.

A lot of athletic cleats have soles which are smaller than the soles of our feet. This is especially true for those of us with extra wide feet... like me. As pictured here you can see what I am talking about. 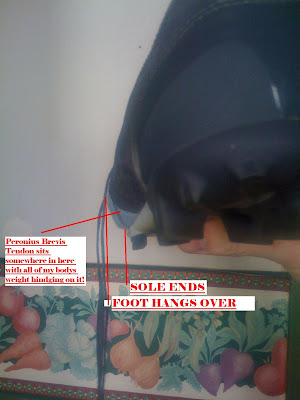 While running and turning left all of my bodies weight (approx 200 lbs) was resting on this tendon... well it tore, or was severely strained. The treatment for such an injury is to stay off of it for a couple months, and keep it wrapped tightly - get this - "until it doesn't hurt anymore."

Another week went by and the pain was still pretty strong. I'll admit that even though I felt pretty confident in my diagnosis, I started to be concerned, thinking that perhaps I had gotten it wrong and that there was something worse going on, or something that I was making worse by not having some doctor suggested treatment I couldn't find via Google. I knew however that I definately didn't want to go to the doctor and pay them a couple of G's to tell me what I probably already knew.

A friend of mine had mentioned to me how there are free clinics all over the place... with all the hullabaloo about universal health care I thought this was a fallacy! I was surprised to discover that the rumor is completely true. I discovered the 4th Street Clinic.

It's website advertises free health care for homeless individuals. I called the clinic and found out that they help everyone for free, homeless or not. They also gave me the number of several other free health clinics around the state. I ended up going to a clinic in Park City which sees people on Tuesdays and Thursdays for free.

The Doctor who saw me, Doctor J. Staples, works at a regular health care location, but volunteers one Tuesday a month to come to the free clinic. He looked at my foot, and before long gave me some familiar sounding advice. I was exactly right in my self diagnoses, including my determination of treatment. He told me to stay off it for a couple months and keep it wrapped! I donated $100 to the clinic for the trouble and crutched my way out to my car with a grin!

"Lot's of people go to college for 7 years!."
"Yeah, their called Doctors."

"Just a shade under a decade!"

Glad your foot is what you thought it was...and God bless that good doctor for giving time to those in need.

And thanks for telling the Six Degrees story at the end of SS on Sunday. If you leave the ward (I'll kill you, but anyway), I will miss that story and all your others.

Isn't google wonderful? I also prefer self diagnosis, and not because I don't have insurance, but because I just don't like doctors. I don't want to pay even $20 to be told I should do what I've been doing already. But good for you for dontaing to the clinic.

Didn't you once use someone else's insurance card to go to the dentist? Tell us that story...

i work for Fourth Street Clinic, asking people for money so that we can continue our goal of providing free, "socialistic" health care services to those in need.

at your expense, sorry, your story made me laugh. indeed, praise google...google alerts led me to your blog.

i just wanted to assure you, donations to community health clinics are donations well spent (so donate to Fourth Street Clinic: www.fourthstreetclinic.org). use google to research tax payer and health care premium costs due to the number of uninsured americans getting health care services from the ER, and you'll be floored. corporate interests and policital prate aside, a national health care system would provide affordable health care to all, and would not have made you wait three weeks to have your foot examined.

this fear of "over taxation" and "socialized goverment" for a universal health care plan is digested by the ignorant without any fact checking. ....maybe when we go from 55 million americans with no health insurance to 155 million, maybe then people will use their minds as much as their ears.

Can I start calling you Dr. Maxim? Last time I tried to self-diagnos/google-diagonos I convinced myself I had a tumor when all I really had was a headache.

Glad I found your blog...it has made for some entertaining reading.

What resulted from my recent doctor visit was 6 visits and 6 $20 copays to a lapriscopic surgeon who eventually told me I didn't have cancer.

So... you're like one of the craziest morons I know. Like the time you jumped out of the back of a speeding pick-up truck on to a trampoline. You play soccer all the time, drive way to fast, drink way to much caffiene, and do stage dives at concerts.

I think health insurance is an investment you should take more seriously... what does your poor mother think.

Doctors are totally overrated! I hate going as well. My sister forced me to go once when my lungs filled up with fluid and I couldn't lay down cause I would drown, but all they did was take an x-ray and told me lungs had fluid in em...duh!! It still irks me that I paid for that diagnosis.

You think you could deliver my next baby?? That will save me lots of money!

No, this is not an announcement

Well I'm glad that the 4th street clinic ended up referring you to the People's Clinic in Park City. I was curious to know why you asked me where you could go. Now I know.