Fame and Fortune: the pursuit 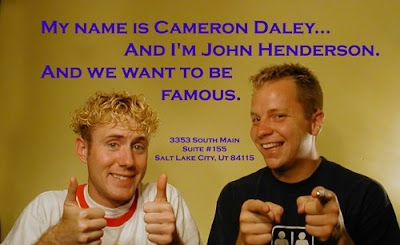 So I've had this blog since last January and I haven't done this yet so I hope you'll forgive me. I promise this blog will not turn into a "John is so cool and amazing" type of blog dedicated to all things cool about me (even though it kind of already is).

I met my friend Cameron Daley 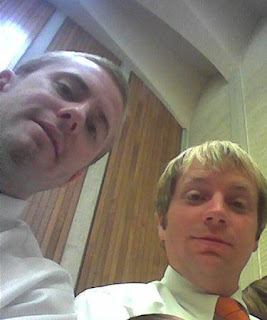 while serving in England on a mission for my church. Our first meeting went something like this: I was not serving with Elder Daley, but I had heard of him. For a conference my compainion and I had to sleep over at he and his companions flat (thats british for apartment) When Cameron came home he saw me sitting on his couch reading a movie magazine. He looked at me and said "Were did you get that?" I said, "Uh Tesco's." The look on his face made me think he was really kind of upset with me. Sure, the "Total Film" mag I was reading was what some might term "unapproved" reading, but from what I'd heard Elder Daley wasn't the type to be bothered by that. He took a closer look at my magazine and laughed. He explained that he had an "Empire" magazine upstairs in his room. (Empire and Total Film are competeing magazines and this particular month their covers were almost identical) He thought for a minute that I had gone into his room, gone through his things and then started reading his magazine. The truth was even more unlikely, that even without meeting each other, Cameron and I were pretty much the same person.

If you have known Cameron and I for any length of time we've always "joked" about how we want to be famous. In fact, the line I still use is "In seven years you're going to need a VIP pass just to see me." We came up with that line on our missions later, when we eventually served together, which is another funny story that I wont go into here. Unfortunately, as you know, you do not currently, in fact, need any sort of special permission and/or paperwork to see either of us.
Cameron and I both knew that we wanted to be famous and we felt the best way to achieve our goal was to be extremely entertaining. This started with us using scripted dialogue on group dates. Then shortly after I returned home from my mission we made our first Short film in a week. It was called "Wonka Willow Wankers" and to the limited audience who saw it, it was, I'm sure a life changing experience. 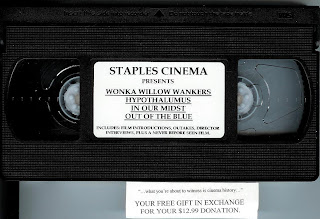 It was this taste of fame that made us want it even more. We decided to make a full length movie titled Out of the Blue: Based on Actual Events. This film was loosely based on me and Cam's dating exploits. A lot of people thought that we only made this movie to make out with cute girls. Though that was a nice side effect, even the best make-out doesn't compare to sitting in the balcony of a sold out theater watching and listening to a couple hundred people laugh at something you made.

In the meantime we paid $4000 to Century 16 movie theatre in Salt Lake so we could put up an advertisement on the big screen (pictured throughout this post) prior to movies. There were three adverts which ran for the entire year 2000. 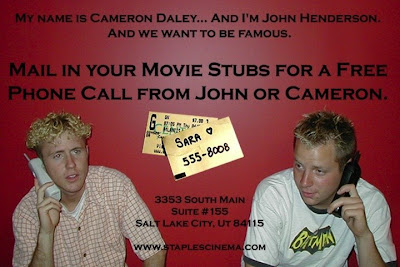 After a couple more shorts films, some script ideas, and a few casting sessions which never came to fruition we decided to change our focus. We moved on to drawing a comic strip called "Out of the Blue". This comic ran in several college newspapers all across the country for free. We didn't want money. (but we wouldn't turn it down) We started hearing people talking about our comic on campus. We received emails about our comic and we even had a few people write letters to campus newspapers trashing on our comics. It was awesome.

Cameron stumbled across a lame "movie review" show on the cable government access channel 17 in Weber County. It was pitiful. Cameron forced me to watch a few episodes and we just shook our heads in thinking "How are these two imbeciles on TV talking about movies and we aren't?" We knew we could do better. We called the owner of the station. We told him we wanted our own show. He wouldn't let us do a movie review show since he already had one (bummer ) so we pitched him a show called Odd Jobs, starring us. He was hesitant, but told us to film a few episodes and give them to him... so we did. He loved it. He loved it a lot. We couldn't get episodes to him fast enough. Literally. He wanted a new episode every week, but it took us at least a month to film and edit each episode. For that reason, Odd Jobs eventually died. 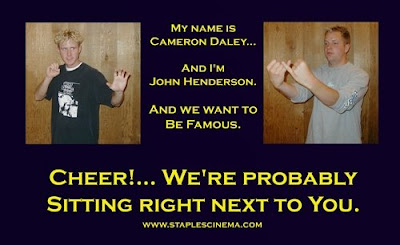 Now on to the point of this post. Recently Cameron and I discovered that the movie review show that we coveted is no longer on the air. We immediately called Channel 17 and secured our spot as the new movie reviewers. One of the conditions of doing our movie review show was... get this... the owner wants us to film at least 4 episodes of Odd Jobs a year. That's how much he loves that show.

So, Cam and I are in the process of getting our movie review show, The Cinematic Experience, on TV. The process is tedious, but in the meantime, I was hoping that YOU, my blog readers would do me a solid*. The Cinematic Experience is currently on You Tube and we're uploading new reviews every week. Would you be so kind as to log on and watch some of them. The more hits we get and the more subscriptions we get to our channel the higher it will show up on the search engine! If that Cambodian guy who sings for Journey now can be discovered, so can we. 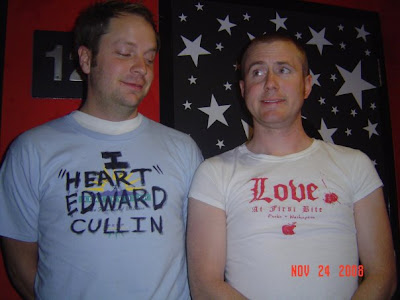 We try to keep our reviews under 5 minutes. We are also extremely interested in any type of feedback you may have. We've received some good and some bad and I can assure you that ALL OF IT is extremely helpful. We've already started incorporating some suggestions we've received into the show. We have a facebook group you should join if you're not a member already. (search for "cinematic experience" in "groups" to find it and join.) And we are currently in talks with comcast about getting our reviews OnDemand. The only reason we do this stuff is because you guys think we're funny. You laughter is appreciated.

If this is what it takes to get my dose of Cam and John every week, I'm in. I will watch your show...

I have faith that you and Cameron will be famous one day. Your movie review show....highly entertaining!!

Ps- Cameron should wear that "love at first bite" t-shirt every chance he gets.

Wow I just had the biggest dose of DeJa Vu. It's like I read this post last week...

Cheers to being famous!