It's Friday night and everyone was meeting for dinner at 8:15. Spaghetti Mama's was to precede the opening night viewing of 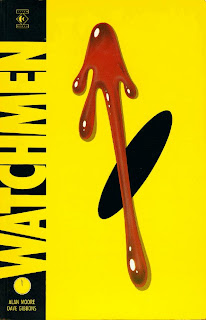 "Watchmen." John was invited to watch "Watchmen" at Jordan Commons IMAX theater by Jon Madsen two weeks prior. John purchased his tickets, borrowed the comic book the movie was based on and then waited in excited anticipation for the show.

A week before the show John received a text:
BEKAH: Hey, want to take the Fun Bus to Wendover Friday night with me Alan and Brit and some friends.
JOHN: Crums! I would love to... but I am going to see Watchmen that night at 9:50. Maybe I'll just drive up after and meet you there.
BEKAH: Oh Crap! I forgot that Watchmen was this weekend.
John, finishing the textersation entertained this thought process "dinner at 8pm (1 1/2 hours) Watchmen (3 hours) drive to Wendover (1 1/2 hours) play in Wendover (4 hours) Drive home (1 1/2 hours) Be home at 8am - Sleep till 2pm... Perfect!" He started inviting everyone to his night of fun.

All in all 20+ people showed up to Jon's movie night. "Watchmen" was good, unfortunately it wasn't awesome like John was expecting. In addition, try as he might, he invited a bunch of people to Wendover, but apparently most find it irresponsible to drive to a casino town at 1:30 in the morning. Turned out too, that Bekah, who invited John to Wendover, and the friends she was going to go with decided not to go anymore.

Regardless, at 1:30am John, Scott, Tyler, Nick and Blair jumped in the Audi and headed west. The drive was somewhat uneventful except for an in depth conversation about dating and commitment. After traveling about 75 miles, during one of Scott's tirades about the difference between being a "player" versus being able to respectfully make-out with a whole bunch of different chicks at the same time. John noticed something on the road ahead. The figure was running from the middle dash marks on the freeway towards the right side of the road. John was traveling in the right lane at 80 miles an our. He started to swerve to the left. Blair screamed from the backseat and Scott and Nick yelled some indiscernible expletives. John watched as if in slow motion this form which looked like a hunched over man waving one arm, ran across the freeway in front of him. The front of the car literally missed this guy by 5 to 10 feet. Had John chose to slam on his brakes the figure would have splattered all over his windshield. Those in the car quickly debated what just happened:

TYLER: Holy Frick was that a deer?
SCOTT: No, it was a guy.
JOHN: Yeah that was a man running across the road.
NICK: We should go back, and make sure he doesn't run in front of somebody else.
BLAIR: Sorry for screaming.
TYLER: Are you kidding? that was a guy.
JOHN: Yeah, we barely missed him... you think we should go back?
NICK: Yes, that idiot is going to run in front of somebody else who wont be as alert. We need to see whats wrong.
JOHN: I don't see any cars stopped or anything, we are in the middle of no where.
SCOTT: We need to be careful, it looked like he had a hood, and we don't know what he's doing.
JOHN: I'm gonna reverse.
BLAIR: What if he's a psycho killer?
JOHN: Then we are gonna kick his ass, there are 4 huge guys in here.
TYLER: Do you think it was an accident?
NICK: I don't see any cars but we should definitely go back ya'll.
SCOTT: Yeah, that's so crazy. There is nothing out here, no cars on the side of the road - nothing. What could he be doing out here at 3 o'clock in the morning?
JOHN: I just saw another car swerve in the rearview.
NICK: That guy is going to get killed!
SCOTT: Oh, look someone else is pulling over.
NICK: I can't see anything through this tint. I'm rolling the window down.
JOHN: We'll be there in a second.
NICK: Uh, your car is making a pretty bad sound.
JOHN: Don't worry about it, but I can't see with you hanging out the window.

John pulls the car back to the other pulled over vehicle, a 10 year old Toyota Corolla. By this time the man who was in the middle of the freeway was in their back seat. John and Scott get out of the front seats of their car. A guy yells out the window. " 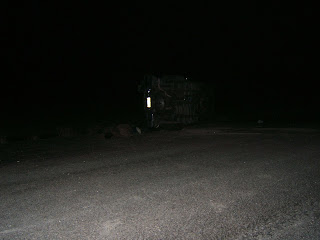 This guy keeps pointing out there and saying "friend." John and Scott look towards a field north of them. At first they don't see anything. Then after their eyes scramble around for something, intermittently in the red light of the hazards, they see a large dark box shaped thing. As they stare at it, it dawns on them that it is a car, resting on it's side nearly 200 yards from the freeway! The two passengers of the Toyota and all of the passengers of Johns car run towards the heap. There is a 5 foot barbed wire fence, that they quickly scale.

The pile of steel that used to be a pickup was on it's side but it wasn't running. Somehow the CD player survived the accident... mariachi music played out of the stereo during the experience as though a film director had chosen it to juxtapose the horror and gore of the scene. Shattered glass and twisted metal were everywhere. The cab of the truck had been smashed almost flat. At first glance it seemed unbelievable that anyone had survived. 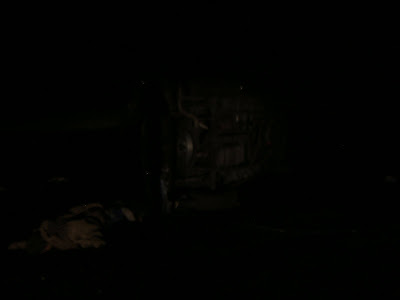 As their eyes adjusted, with the help of a little moonlight a body could be seen at the back end of, what at closer inspection is a newer Ford truck. John gets there right after Scott. The body is that of a man, he is lying face down. There is blood coming out of his ear and all over his face. His nose and face are smashed into the asphalt of the frontage road that his truck somehow landed on. He is not responding as Scott try's to talk to him. Nick yells, "Did someone call 911?" One of the other two Samaritans, two guys from Clinton, UT, responded that they hadn't gotten that far yet. Tyler quickly calls 911 to inform the authorities of the accident. John runs back to his car, it is so dark that he maneuvers his car to shine his headlights onto the scene.

The genius who was flagging people down in the dead center of a dark freeway was sitting in the back of the other vehicle. He was clearly drunk. He didn't speak a lot of English, but it was pretty apparent that he didn't grasp the gravity of the condition his friend was in. "Do you think my hand is going to be alright" he asked. His hand was bloody and swollen. It looked like a rubber glove filled with water which hung in no particular fashion. As though the bones in his hand had been crushed to a powder. He had a laceration on the side of his head, which bled a little more when he found out that 911 had been called. He cried "no poliz, no poliz!" John wondered if he was an illegal or if he just feared the coming DUI. John told him, "Your friend needs to go to a hospital." and then thought, 'and if you don't want a hook or claw or something, you do too.'

Back at the pickup the Clinton duo had laid a few coats over the man, who was breathing. This was evidenced by the loud snoring sound he was making. Of course in juvenile idiot fashion no one in Johns car even brought a coat. John and Scott at least had hoody's on, but the 20 degree temperature bit harder with even the slightest breeze. 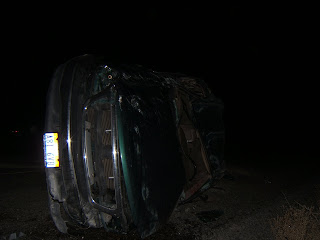 John and Scott walked around trying to piece together what had happened. They followed a trail of glass and gashes in the asphalt, but noted that the fence they climbed seemed unharmed. Initially they thought that perhaps these guys were traveling on the frontage road. Then they noticed the bumper on the other side of the fence. Near the bumper a fence post had been bent slightly about 10 inches. The barbed wire had been pushed down about 6 inches and it became apparent that the truck hit the embankment so fast that it nearly cleared the fence altogether. Scott pointed out where the bumper was, and then you could see where the truck first landed because of a shoe and some debris... 50 feet behind that the truck lay on it's side emitting the happy tune of mariachi music.

"Are you sure? All right then. Have a good night."

I'm with Blair. I would of thought he was a serial killer and probably wouldn't have gone back to help. I watch scary movies and know what happens in these situations...though I probably shouldn't watch em cause I'm pretty sure a zombie attack is imminent now.

To Be Continued. . . what is that? You have me hooked, you had better finish writing soon!

Well I'm interested to see how your story turns but more importantly you honestly thought "Watchmen" was good? I didn't prepare my self like you; I don't know the comic book story. That was the worst 3 hours of my entire life! I thought that movie was never going to end. The other 3 people I saw it with thought it was horrible too! I don't know if I should trust your movie reviews anymore after that one!

You and your overabundance of wild stories. I can't believe how many crazy things happen to you, dude, but I'm grateful you share them with us :D