It's 3:16 AM... I can't sleep. I'm not sure why, I am not experiencing heavy doses of stress, or depression, which are usually the only reasons I can ever point to for me not being able to sleep. I have tried everything, TV, cleaning, reading some blogs, reading my scriptures (that almost always puts me to sleep) I know I am tired, my eyes hurt and my breathing feels labored. Maybe I can't sleep because I only got 4 hours last night and my body is too tired to sleep. Anyway I figured I would just post this picture and write a little blog post about it. 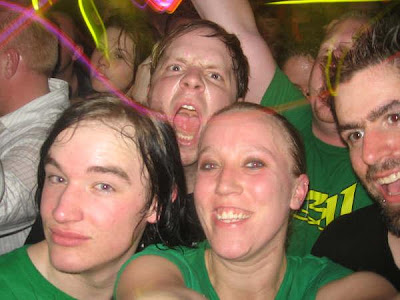 This was at the "311" concert I went to in Las Vegas last weekend. It was tons of fun. We met this girl after the concert, and then again at breakfast and she comes up and says that she has this great picture of me. When she finally emailed it I couldn't believe it's coolness. I always make an effort to be doing something humorus in the background of peoples photo's... I didn't end up as sutttle as usual... and either this is the best ever... or it's just the only one I have ever seen, maybe they are all this good. Such passion! I amaze even myself. Granted I am a little, strike that, a lot sweaty, and that guy next to us with the pupils that are the size of silver dollars really makes the photo a one-of-a-kind. I'm a bit astonished at 3 AM how my writing just seems to flow, almost effortlessly. I just tried to go to Wendy's and pick up a Frosty... they were closed. It's been a long time since I have been to a Wendy's after 3, I kind of forgot and thought they were open 24 hours a day. I wonder what year it was when "7/11" started being open 24 hours and was no longer only open from 7am to 11pm. I'm pretty sure it's been 24 hours my whole life. Seems preposterous that a gas station not be open 24 hours, and yet it still happens all the time. Speaking of time did you know they (by "they" I mean scientists) have proved that in moments of great intensity that the human mind actually perceives things moving in slow motion. The Discovery Channel did this series called "Time" and they actually did experiments to prove it. All I can say is "I knew it!" Today this 20 year old girl... who happens to be really cute spent a little time flirting with me. I really liked it. Not cause she was 20, but because she was cute. I brought up my age, because I'm obsessed with being the old dude and being persecuted or disliked or at least disqualified in matters of dating simply because of the fact that I am older (even though when I really think about it I conclude that it's probably all in my head.) She went into the whole "age doesn't matter" stuff that younger people always seem to say. I reminded her that when I was graduating High School that she was getting baptised! Maybe even on the same day... (this is one of my best sayings with 20 year olds) She thought that was funny, but it didn't phase her. We are going out in two weeks. Is that weird? there is a 10 year difference in our age. Obviously I'm not concerned about marrying her right away and recognize it's just a date, but a date can turn into dating and then into more - so anyway, is it weird? it feels creepy almost. Sure she's legal, although the whole legal term refers to "sex" which is not on my ever righteous Mormon-living-agenda, which makes the whole "legal" thing a little moot. Not that I'm making a case for going out with girls under 18, I'm just saying....... actually... I don't really know what I am saying. I am so tired I am kind of in a zone and I just keep typing. Since I don't know how to type that means I have to look at the keyboard the whole time and two finger it, which doesn't give me any room to proof read. I know, I know, a grown man that doesn't know how to type. Maybe it would make you feel better to mock me. Here's some more ammo for mockery: I never learned cursive either. When I was in grade school I went to a school called Atkinson Elementary until 2nd grade, in that school they taught cursive in the 3rd grade. Before my 3rd grade year I moved schools to Youngston Elementary where they had already taught all the students cursive in the 2nd grade. I still can't really make z's, r's

or anything capital, but was able to fake it pretty good until I graduated high school, where now I never have to use cursive... what a waste - I mean for you other people who learned it. Then again now that I think about it... the details are all a little fuzzy, especially about grade school. Hmmm, that could be because I am tired or, because I have a terrible memory. So who knows. Either way, I have a meeting at 9 so I think I will try my scriptures again. Good night.

That is a great a picture. Love concerts.

I wouldn't worry about the 20 year old situation ( as long as she is relatively mature for her age and doesn't giggle at everything you say...I mean EVERYTHING).

Don't worry- no one really knows how to write the z.

Yeah, what was cursive all about anyway?

Um what just happened?? Are you sure you weren't asleep when you wrote this psycho babble?? Did you try counting sheep??

That is a great pic. I just made it your profile pic for my phone! Its pretty awesome.

Speaking of 311. Today is 311 day! Great timing for your post. I wish I was in New Orleans right now.

10 years is a lot, I bet you $20 that you decide it was a waste of your time afterwords.

Its like Wooderson (Matthew McConehey) says on "dazed and confused"

-that's what I love about those 20 yr old girls, I get older and they stay the same age.

Go for it bro.

My husband is 14 years older than me and it works. Who cares if she giggles, as long as she puts out!! j/k

I had a dream about you last night. Weird.

I had a dream about you last night. Weird.

If you're not interested in sex, I know a sweet 13 year old that's REALLY mature for her age. Seriously.

What completely astonishes me is that you don't know how to type without looking at the keyboard??? I am seriously shocked!

I have been checking out your blog since you started it, and it always makes me smile! It reminds me of being young and living in Utah and making out with everyone, etc! Anyway, glad to see that I made your friend list. You're on mine as well.

And by the way, I have an "In and Out Burger" t-shirt too, and I love wearing around here. I've only had about 2 people comment on it and tell me how much they love eating there!

You should post at 3am all the time. That was one of the best reads so far.
And just so you know, you can press pause on the stupid country songs(which I happen to like) if you don't want to hear them.

I think my first Frosty with french fries was with you in your old Honda. That car was seriously amazing in the snow. You scared me to death. I liked yelling at you a lot. I still do. Odd....

Her spirit may just be older then yours, how's that for creepy? No matter how much younger she is than you everyone eventually sags and wrinkles. As long as they have a twinkle in their eyes that's all that matters.

20 years old...that seems so long ago to me, even though it really wasn't. Like it's been said before, just make sure she's pretty mature fot her age.

As for the Wendy's thing...how late are they open? I thought they were open 24 hrs as well.

What if your 27 and still giggley? Now I'm kind of embarassed.

I didn't know you were a big insomniac. I have insomnia about half the time, mainly when I'm stressed out. It's so lame because there is no good tv on that late, reading seems pointless, and no one appreciates a "how are you doing" call at 4 am.

P.S. If the doctor ever gives you a sleeping pill and tells you it's not addictive, don't believe it. Because 6 months later when he takes you're addicted and he takes your prescription away, it's painful.

Speaking of blog-stalking... Hi John! I'm Jen, I'm one of Jane's friends from the hospital, a fellow nurse if you will. Anyway I was just blog-stalking and I thought I'd comment on dating someone 10 years younger than yourself. As a girl who has dated a couple of guys who were significantly older than me, I have to say that it's weird. I mean you can't really relate on the same things like movies and music because you're from different generations-she probably doesn't know that Transformers was a cartoon before it became a hit movie, and that Nirvana and Pearl Jam are classic rock bands. Just throwing it out there......

Jen you blog stalker you!