Recently, I got set up by someone. (Due mostly to my own embarrassment, I will change some of the names involved in this story) The person who set me up, Rosarita, is an avid blogger. She gave me her friend, Jesse's, number about the same time I started getting into blogging. The day that I called Jesse to set up a date, two things happened.

First, being new to blogging I was excited to find any of my Friends who had blogs. I stumbled across my friend Amber's blog, and the post she had up at the time was called, "Blog Stalker." I read through it, and thought that surely if Amber was doing this most everyone was.

Second, later that day, I was having a conversation with my friend Laura who told me about a time she went out with this guy who had googled her. He found her blog and read a bunch of her posts so that he could find out things about her ahead of time. He asked a bunch of loaded questions, and then told her what he did. She found the whole thing very annoying.

After reviewing the two experiences, I thought "wow that's genius." If the delivery were a little less creepy and underhanded it would be a good way to be prepared for lulls in conversation. Knowing a little about your date always helps out regardless of where that information may have come from. 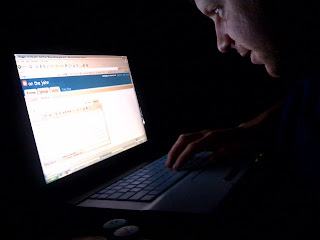 So I wondered if Jesse had a blog. I went to Rosarita's blog and one of the links off to the side was to a blog called "Sarah & Jesse" I clicked on the blog and scanned briefly for some pictures. I noted that there seemed to be only pictures of Sarah... I read through some of the blog posts. All of them were written by Jesse. A few times she had gone out of her way to make fun of Sarah for never posting on their joint blog.

After scanning through the posts on their blog, I surmised the following:
1. Sarah & Jesse were related, sister's I thought.
2. Jesse did all the posting and never saw fit to add any pictures of herself, just of her sister.
3. Jesse had recently applied to nursing or medical school at the U.
4. Sarah was pregnant, and wondering what to name her son.
5. Jesse had spent a lot of time over Christmas shopping for boots for Sarah.

I figured that was enough ammo to ensure smooth conversation during me and Jesse's up coming rendezvous.

On the date, I first noticed something was wrong when I asked Jesse about school. She said she was done and just working. I then asked her about work, thinking maybe she was a nurse and the specific post I was thinking about was old or something. She informed me she had a part time job, and didn't know now, nor had she ever had any idea what she wanted to do for a living. Let alone having the were-with-all or drive for medical school. Puzzled I didn't think much of it. Then we started talking about family. I asked her "So your sister is pregnant isn't she?" "No." she replied. "Oh, uh I uh thought Rosarita said something... I must be confusing something." I decided that I was a little confused, it was all a little weird and decided I would not reference my secret blog findings any more.

The date went well, aside from the awkward conversations had as a result of my blog staking earlier in the week. Over the next few days I checked the "Sarah & Jesse" blog. I was looking for a new post, something that would clear up why my questions didn't elicit any answers.

Finally the day of our second date, Jesse had published a new post. I began to read it eagerly... and slowly I began to get sick to my stomach. How could it have never occurred to me through all this that Jesse was in fact a man! Not the Jesse I had been out with, but another Jesse altogether that knew Rosarita. Not Sarah's sister, but her husband. She/He/It did have one of those names that goes both ways, and She/He/It was a link from the person who set me up, and there was the whole shopping for shoes thing. Granted I only scanned the posts, I mean they weren't very interesting. Perhaps had I been more earnest the mistake had not been made. However, it became pretty clear when the sentence written by Jesse said "My pregnant wife Sarah is..." followed shortly by a photograph of the two of them. The experience reminded me of a comic that my friend Cameron and I did a while ago called comic 18, check it out. Perhaps that will help express how I felt that day a little better. It was awful, I felt like a royal douche and vowed never to tell anybody about my silly mistake...

Well except for my blog.

So what are you saying? I really hope you're not making fun of dudes with names that could go either way.

I agree with Mr/Mrs Ventura. I thought my name was dudelicious until Cameron Diaz came into MY scene.

Guys, I wasn't mocking guys who have names that go both ways. I didn't say guys with names that may also be used by girls are losers...

then again, I must have hit it pretty close to the mark to get you all riled up like that.

I'm going to forget you said that while I eat a gallon of Ben and Jerry's and watch The Biggest Loser.

I love this story. Another lesson in bad decisions based on assumptions.

We've all done it. I believe you had good intentions though. I think the guy who did it to me was trying to prove his resourcefulness while at the same time having fun making a fool out of me.

Rosarita? Come on, you could of thought of a better name for me than that. Yeah, I know this story was about me and my "set up." I'll have to talk to her and see what she thought about the whole thing. discreetly of course. I wouldn't want to ruin your rep.

I just read all your comics from "Out of the Blue" to see what you were referring to and I gotta say...Hilarious!! I didn't know you guys did those.
-Jaime

Love the comics. Are you still drawing those? I have a couple ideas for you that I been waiting to unleash on the world. Can I be introduced as a visiting character?

Blog Stalking is scary business. First off, when I was new to the blogging I found this ridiculous blog with pictures of a pregnant lady on it. I decided to make a blog post about it (Hot or Not) with a link to the blog. Little did I know you can track how people get to your blog! Here's one though that will throw you for a loop... Today I sort of met a lady's blog that I stalk. She is in rehab at the U after experiencing a stroke after having a baby. Crazy huh? I didn't talk to her but I felt like I knew her intimately! She probably would have been weirded out if I talked to her. Anyway, here's a blog post for a comment if I ever saw one!

I have definately blogged stalked before and I can't shake this feeling of guilt everytime I do it. It really does feel like your kind of peering into the windows of someone's house...looking at their kids, house, listening to them talk about their vacations, etc.

And even though you feel like you shouldn't be there, you can't help but to keep exploring...it's kind of addicting. Wow! I'm kind of creeping myself out right now.

So I will let you blog stalk me only if you add me to your friends list, because I have so much control over who you stalk. janeggardiner.blogspot.com

unless of course my stories are not interesting to you, which you have suggested in the past- you could help me out though because a lot of people look at your site and I could use a little free advertising

What an unfortunate mistake. But it serves as a lesson to all blog stalkers. It's only ok to stalk blogs of people you've already gone out with several times or people you know and don't plan on dating.

I know this post is, like, a year old and no one is going to read this comment, but I'd just like to say I'd be flattered if I found out I was being "blog stalked" by complete strangers. But I'm a dude and I think it's different for guys.


Mansour Engineering have a refined understanding of client and market priorities in all facets of mechanical, electrical and civil engineering from engineering assessments and studies through typical and specialized design commissions, document production, contract administration, design/build, energy studies, field inspection and supervision, to building systems commissioning and consulting services for building operations