A gas tank in the life of John Maxim: Day two

Day 2
May 3rd
I have a Soccer game at 10am, so I got up at 8, thinking that I could spend a little time looking for Movie, my dog who disappeared in the night yesterday, and still hadn't come home. My plan was to get all ready, and then drive around and look for him till my game started. I grabbed some breakfast and went outside to eat on my front steps. Hoping that just maybe, Movie would happen by in his travels. I sat there looking around, and as I took my last bite of canned salmon, there I saw Movie 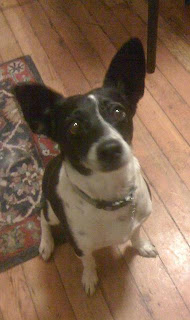 coming up the street with some woman. I stood up and yelled "Movie!" He saw me, and ran strait over to me. This woman introduced herself as Erika. She was in her mid 40's had a backpack on, sunglasses, and her hair pulled back in a pony tail, she was smoking and a little out of breath due to her brisk walk. She said she was walking from the bus stop at about 10:30 last night, and saw Movie, right over there across the street. Movie's tag only had a phone number on it, and she explained how she didn't have a phone. So she took him home and he stayed the night with her. She said he kept her up all night, and that she was now late for work. She was walking to the bus to get to work, but that she was already 20 minutes late, and would be more like an hour late after her bus ride. I told her that I would be happy to give her a ride, she accepted immediately. It was the least I could do. Though deep down I wish she just would have left him alone last night cause Movie would have just come home on his own... but her heart was in the right place. I took Movie inside and we left my house at 8:58am.

at 9:13am
after traveling 9.7 miles
we arrived at The Verizon Wireless call center at 2200 N 2200 W
I thanked Erika for her kindness and she went to work.

at 9:27am
after traveling 9.6 miles
I arrived home.
I went inside and told my brother of the morning's events, and then he jumped in my car to go to the soccer game. We left at 9:40

at 9:47am
after traveling 2.4 miles
We arrived out front of another players apartment building
Alvin Togba, he jumped into the back seat.

at 9:50am
after traveling 1.1 miles
we arrived at Riverside Park
Our game was against a team named the Vikings. We had played them many times before. They have this one guy on their team who only has one arm... he's pretty good at soccer, 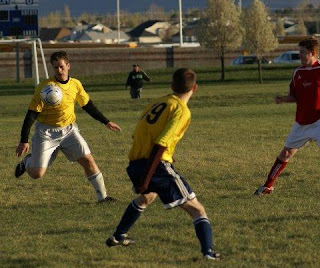 seeing as you don't really need arms to play. He is a real jerk though and tackled me from behind, whilst he spewed profanities. I hurt my ankle and missed the last 20 minutes of the game. We tied 2 to 2. I know what you're thinking, "It sucks that in soccer they can end a game in a tie." I'm with you on that, but in our league games don't end in ties, they end in shoot outs. We lost the shoot out though, 3 to 2... maybe ties aren't so bad eh? We left the park, heads hung low at 12:24pm

at 12:28pm
After traveling 1.1 miles
We arrived back at Alvin's apartment.
He got out of the car.

at 12:35pm
after traveling 2.4 miles
we arrived back home.
We got something to eat, and fiddled around a bit. Then we headed out to my parents house to help my sister Dana move. We left at 1:10pm

at 1:36pm
after traveling 21.8 miles
we arrived at my Parents house in Sandy
My Sister Dana is moving into my other Sister Aprils house. It's mutually beneficial because Dana will feel less like she is still a kid, and April will have someone around to help her and her Husband babysit and stuff. We moved a living room set, up into my dads truck. Somehow Josh spent the first chunk of our visit talking to my Mom about some mail he had gotten, and so Dana and I had to move the couch and love seat. Which went pretty good except that we knocked all but three of my Moms family pictures off the wall (15 frames), and thus down the stairs breaking several frames. Josh started helping, but then my Dad was busy fixing the broken frames, so he stopped lifting stuff... (yes, I am complaining, I had to do way more hard work then everybody else) anyway, we strategically were able to load everything into one truck, and then into the back of my car. Before leaving we sat around for about an hour hanging with the parental's. We left at 3:04pm

at 3:13pm
after traveling 5.4 miles
We arrived at Sisters house in Sandy
Donnovan, my brother in law was there, and it took us less than 10 minutes to unload everything. Donnovan gave me a little crap for not calling him last night when I decided not to come get the karaoke machine... pretending like he was waiting up all night for me. We both know he was busy playing some online war game. We left at 3:25pm

at 3:28pm
after traveling 0.3 miles
we arrived at Donnovan and Aprils condo in Sandy
They are currently selling the condo with the best Real Estate Agent

in the world, yours truly, and they have some renters in the property. Some agents have been re-using the lock-box without calling to schedule an appointment and walking in on people in the shower, so I stopped to change the lock box code. It took nearly 4 whole seconds.

at 3:54pm
after traveling 18.1 miles
we arrived back home.
I mowed my lawn. Then I started to get ready for my date with Tracey from the night before. She was coming over to my house and then we were gonna go to the Real Salt Lake game. David Beckham was going to be there, which might be why I was so successful in getting a date with such a cute girl on such short notice. Since she was coming over I had to make sure that my home was free of poops, and vacuumed and fabreezed. She showed up, and we left for the game at 6:20pm

at 6:43pm
after traveling 4.2 miles
we arrived at Rice Eccles Stadium in Salt Lake
I know of a pretty sweet secret parking space, but it was taken this time. Curse all these David Beckham fans! We walked a little further than usual, but made it before kick off. The game was good. Tracey was really taken by David Beckham, she confirmed that his good looks were as advertised. I was impressed too, despite everyone around us scoffing at Beckham with mumblings of how he was a sell out and wasn't very good anymore, tonight he score two of the most amazing goals I have ever seen live! In one instance he took full credit for a foul he made that the referee didn't call, and at the end of the game he gave every girl there what they wanted by taking his shirt off, giving it to a fan and then walking around to each side of the stadium and clapping. I had a feeling with him so close that Tracey would have a hard time remembering I was there, he is tough competition after all. So I tried to be funny and suggested that if David Beckham were gay that I would definitely switch teams and go gay too. She thought that was funny, and I felt I had averted rejection. We left the stadium at 9:51pm

at 1:03am
after traveling 6.5 miles
we arrived back at my house
(the details about what happened between 9:51pm and now are a little fuzzy, but we did travel 6.5 miles whatever we did, and that's what is important, this is a log of how I use gasoline after all - not what I do on dates.) I walked Tracey to her car, and...

Three hours? You lost three whole hours? What the crap, dude! Slo-mo NCMO or something??

HAHA you're trying to make us all believe that you possibly got some action from Tracey??!! Oh John you're funny, hahaha so funny!!

You sure didn't travel very far in those 3 hours. You must have done something cheap like 7-11 slurpees or something. And I'm sure she only got a "perfect" hug at the end of the date, if it was more you probably would have bragged about it.

I have to admit, I thought these posts were a little annoying - not your best work, but if I ignore the times and miles and just read the paragraphs they are pretty funny.

So did you get some or what? You can't leave us hanging like that!

Dude, you write this huge ass post, and the only comments refer to the last paragraph... seems as though all these girls are a little to interested in your personal life, maybe they all want you and are a little jealous.

Whatev's - I'm just really glad you told us that Alvin "got out of the car." it ties the whole adventure together.

Dude... she totally slipped a rufie into your slurpee.

What are you, some type of Blog Tease?!?! At least tell us you'll fill us in once the girl moves. I've found that girls that are soon to be moving are much easier hook-ups so I'm assuming you got some....

SRA, Emily, Nicole Williams, Quela, and The Pachuillo Family: I value the virtue of women and would never act inappropriately with them, furthermore I respect her privacy and allow you the option of believing whatever you like.

El Shake: Yes all of the girls who have commented totally want me, and it is obvious by the way they are acting, and the way they look at me... well except for Quela, she's my sister.

Heather: Yes, I eat canned Salmon for breakfast, especially on a game day. Lots of protien.

Even people in Seattle don't eat canned Salmon for Breakfast.

26/07/07 Mr Wolf's Noodle Bar - Bristol, England 12/23 - Colorado Springs, CO - World Arena - 4:00 PM & 8:00 PM An idyllic but idle fantasy, to be sure. However, you have undoubtedly discovered for yourself that any concept you wouldcare to acclimate your ensemble to, such as how to approach a decrescendo, can, with sufficient reinforcement, become part of their musical intuition. Future research regarding Isaac's work and contributions should also include a complete bibliography of his compositions, arrangements, articles, and books.Much of Isaac's work is out of print and a bibliography of Isaac's works would provide a valuable reference for analysis and implementation of Isaac's philosophies on composition, arranging, teaching, and leadership.Much of the comments and analysis of his work come from colleagues who provide laudatory praise of his life and work.Given that Isaac is a seminal figure in the history and development of the school orchestra in the United States, a complete bibliography will provide a baseline of comparison with other representative works from each decade of the 20th century.This comparison may provide a more critical analysis of Isaac's contribution and inform us on how others since Isaac have improved upon his philosophy and techniques of arranging for the school orchestra.