As I walked up to John Maxim's home on Saturday, I could hear the rumble of loud music from down the street. I entered through the front door... and it looked like a party - dim lighting, loud music, party trays and beverages on display, but no people. I walked through the house, back into the guitar hero room and I could find nobody? I wondered if maybe the whole party had gone to Molcasalsa, though that activity usually doesn't take place until 3-4 in the morning and only with a select few lingering hardcore party animals. No, it was 9:30, 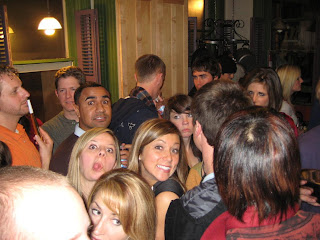 the text invite I got said 9:00. I started to partake of the treats when Josh walked out of his bedroom. He explained that I was the first one there, and that John was in the shower. Things were looking grim for repeating the success of John's New Years Party by 10:00 only a handful of people had showed. My doubts were quickly set aside however as the over the next 30 minutes wave after wave of party patrons came through the door. 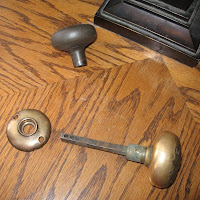 there had easily been a few hundred people through the front door. I noticed amidst the frolicking that the door knob had broken off. Nobody fessed up to being the person who actually did it... but there it sat. In light of last party's broken floor it seemed a welcome mishap and John simply shrugged it off.
People were still pretty nervous about the floor. It was bouncing pretty good. Apparently John and Shana decided to go down stairs and see how the floor was doing. Upon initial inspection everything looked fine. There was some bouncing but noting compared to the horror witnessed on New Years Eve. Then Shana pointed out one joist just to the side of the repaired joists which was bouncing more than the rest. 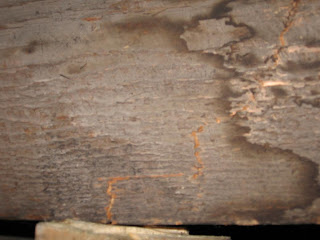 Despite Shana's concerns John jumped up underneath the vibrating floor to inspect closely. After a few seconds he frantically started looking at the ground. He said "It's cracked!!!" The joist had a crack in it that was opening and closing like a little mouth as if the the joist was singing along to the music above.
Without any thought for his own life, and knowing that the party must go on, John said "I need to try and brace it." The average man would have just stopped the going's on upstairs. Not John Maxim, no, he looked around for what he had on hand. There wasn't a 4x4 left over that was the right height. So John took what ever materials he could find and started building a beam. 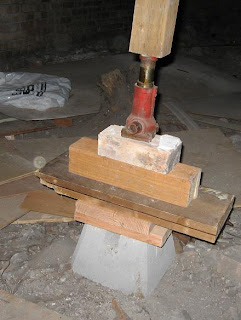 After many different combinations where he just couldn't seem to get the right height, he was finally able to get a jack on top of a bunch of a stuff, and jack up into the dance floor while it was thumping. The music went, "to the windooow, to the wall!!!" John went, jack, jack, jack, jack. As pressure started to mount on the beam it became unstable and the stack of items John had collected burst shooting pieces... the 4x4 hit John in the arm and left a nasty bruise. Undeterred, but warning Shana not to stand directly behind him even though she was 10 feet away, John started building again, taking great care to make sure things were balanced evenly. This time around he was able to jack up the beam into the floor with out incident. The crack stopped singing along, and the folks dancing above never even knew that there was a problem. 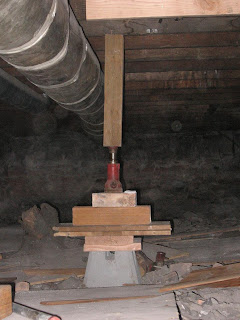 Like Batman without a mask John had saved the day.
The party was pretty much over, only a couple patrons remained mingling. The cops didn't show up until 1:30 in the morning, right as the party was dying down. Near the end of the night after hearing John brag about his heroic endeavor for the hundredth time I asked him if everything else went well. He said, "The party was a big hit, but I missed out on one thing. There is this girl, who I have seen at two parties previous, she is beautiful and so I have been too chicken to talk to her. I promised myself that if I saw her tonight that I would go talk to her. She came, and I was about to go over, but that's when the whole floor thing happened. I was downstairs for nearly half an hour, when I cam back up she was gone... oh well hopefully next time I guess."
With all the fun that was had, I look forward to many more party's at Johns place. I wonder though if its worth all the effort if, at the end of the day, one doesn't get the girl... I guess that's for John to decide.
Johnny Metropolis
at Tuesday, April 01, 2008

Is she the hottie smiling in the top picture? If so, she should be easy to find.

I was at this Party, it was really fun, I don't think Johnny Metropolis did it justice - in fact I didn't even see him there.

I had no idea about the floor, that's crazy, I must have left before the bragging started... probably because I'm "the girl"???

Love the pictures of your floor that keeps trying to quit.

If you're serious about the beautiful girl you're too chicken to talk to, you should post the story on Craigslist's "missed connections". I've heard success stories about that...

I'm sorry I was the party animal and it wasn't your dream girl. (Yes I have my pink fluffy blanket and thumb in mouth right now!)

That party saturday was way fuunnn!!! good job. oh my gosh and i've been craving that salsa you made you'll have to make a special trip to provo and bring us some :)

I second Emily's comment. My roommates keep asking me about that salsa and want some more of it and since Emily is in Provo and I'm in Provo maybe we should have a salsa party!! You would be the only one bringing the salsa of course and we would just be eating it, and you could just watch us while we did that and your dirty thoughts would follow......

Your like the villian in THE INCREDIBLES - you put everyone in harms way so you can save them!

"Hey evryone come dance on my broken floor" says John as he rubs his hands together menacing like.

I don't think thats very heroic. I don't know how you sleep at night

Soooo....about that broken door handle. Sorry! There was a lot of adrenaline pumping through my body when the handle came off in my hand. I had just left the dance floor to get some fresh air and I must have exerted more force than was necessary to get the door open. You see I was in a hurry to get outside so that I could get back inside to dance some more to the superb booty shaking songs you had playing. In my defence though I'm not sure it was wholly my fault! There was a guy on the other side of the door holding the other half of the handle. He was probably trying to sabotage your party and I thwarted him!! So maybe I'm the hero of the night?!?!
:)
-Jaime

Ps- I'm also pretty sure I told you about the door when it happened...

Seriously? The saga continues. Sometime I need to venture to one of these parties. I could help you search for that beautiful, boring girl.

The jazz won't be going down in flames..this is when they get all lit up!

really you may be single, but your life is way more interesting than mine! I think I'll have to join JoRae one of these times and check one of your parties for myself.

congratulations, you have single handedly become the reason I could never do a blog.
Your life is just to interesting and well written that my blog would just be a disappointment.